Fútbol Más’ old pitch in Iztapalapa was far from perfect. Nestled into Mexico City’s east side, a neighbourhood with one of the highest violent crime rates in the city, was a concrete ground the football for good organisation ran programming on.

The bumpy pitch was partly a reflection of the community’s love for football and constant use of the pitch. But the two earthquakes which hit the region in 2017 and 2019 didn’t help.

A wall was caving in and the metal fence on the pitch’s sides drooped down brushing the tall players as they weaved around the court with a football at their feet. During the rainy season, David Samayoa Diáz, a coach at Fútbol Más, his players, and their parents would pick up brooms before practice and sweep away pools of water. Often, thirty minutes later, the rain returned leaving the sky with the last word.

So when David found out the pitch was going to be renovated, he was thrilled.

“It was a dream,” said David while reflecting on what having a new pitch means. “For the community, this pitch creates a sense of belonging.” 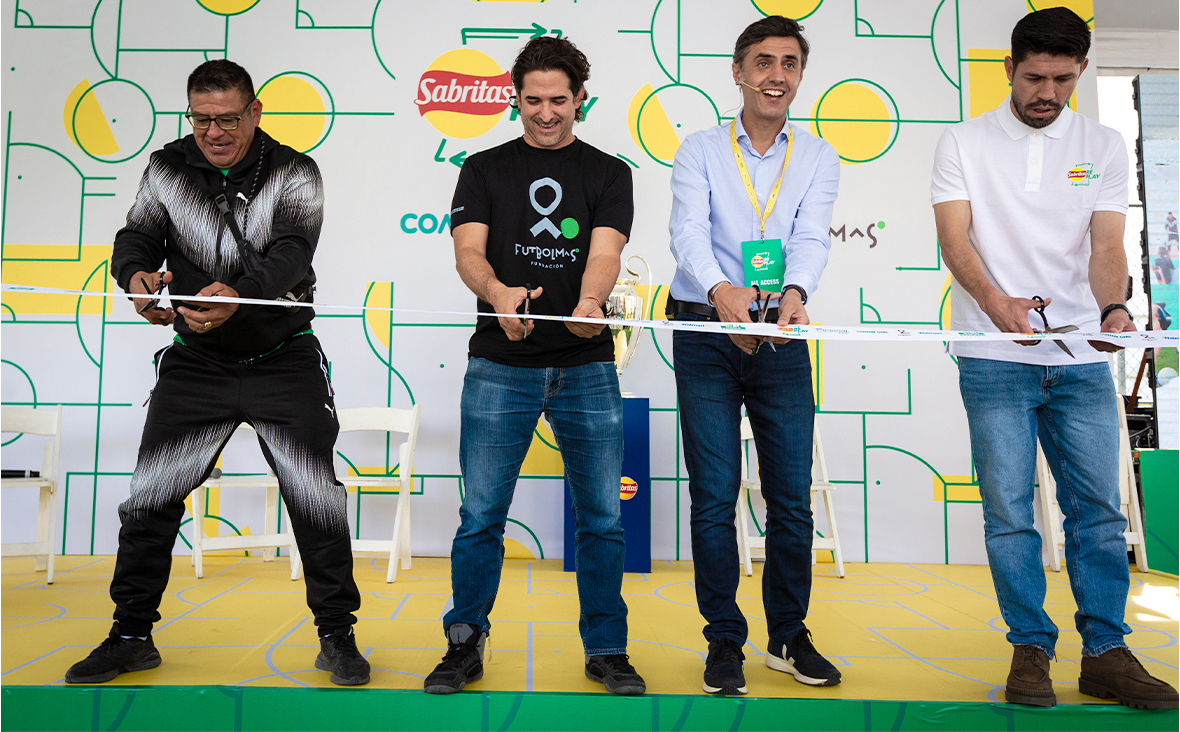 On Tuesday, Oribe Peralta, a Mexican football legend, joined the community for the ground’s opening.

“I am sure this pitch will have a positive impact, uniting the community through the power of football, helping them to learn, grow, develop confidence and teamwork, and of course have fun,” said Oribe.

Fútbol Más’ newest pitch is part of the Lay’s RePlay Project, an initiative run by Sabritas (the brand under which PepsiCo brands Frito-Lay products in Mexico), PepsiCo, UEFA Foundation, and Common Goal, turning old Lay’s crisp packet into 5-a-side pitches. The project teams up with Common Goal football for good organisations to ensure the sites are not only environmentally sustainable but socially as well.

“More than a football pitch, we have built a space that brings joy to the community where they can come together and enjoy moments of fun, happiness, motivation, and empowerment while promoting inclusion and sports,” commented Hernán Tantardini, vice president of Sabritas.

In addition to Fútbol Más in Mexico, AMANDLA in South Africa, Cruyff Foundation in the United Kingdom, Love Futbol in Brazil, and Balon Mundial in Italy are all home to Lay’s RePlay pitches. The project plans to expand with local partners in the Middle East, Europe, North and South America all lined up to open new pitches in 2023. Each football for good organisation will run programming tailored to their local needs and help create safe and inclusive spaces to play. 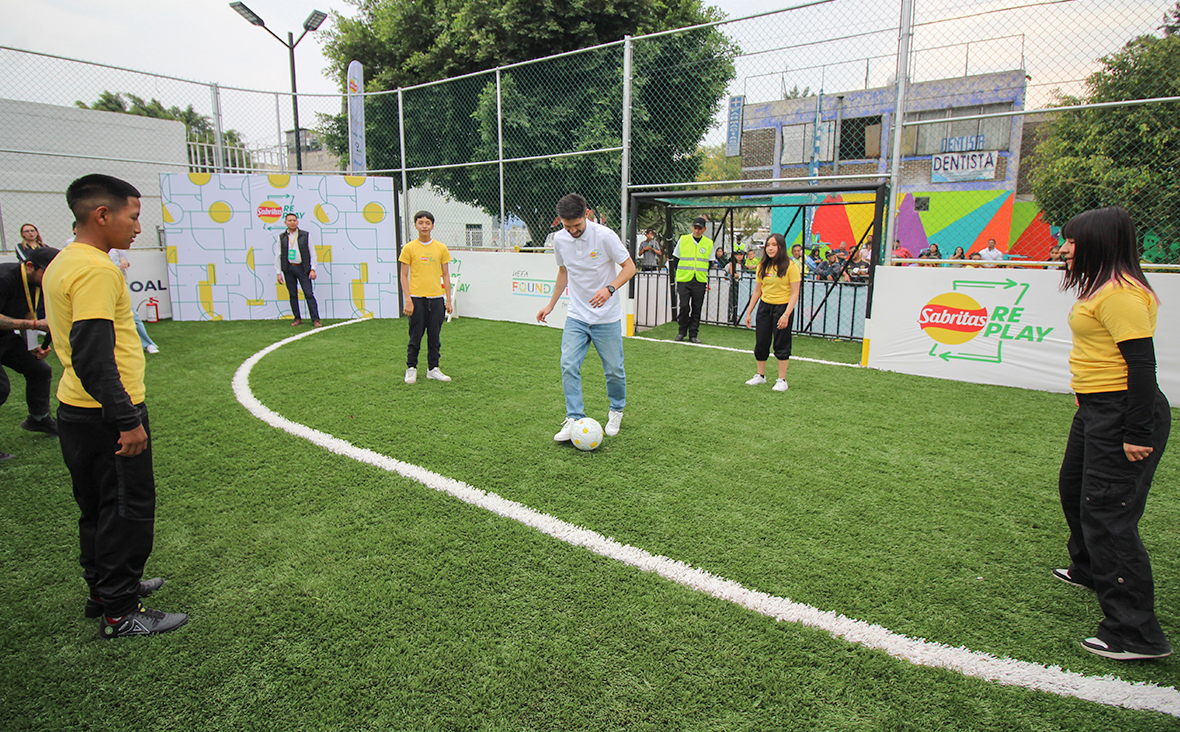 “Few things are as inspiring as putting sports at the service of communities,” said Urs Kluser, general secretary of the UEFA Foundation for Children. “Here at the UEFA Foundation for Children, we believe that this is essential to ensure the holistic development of young people, especially those who grow up in underprivileged communities. With this in mind, RePlay has become one of our most consistent programmes, and bringing this new pitch to Mexico allows us to continue spreading our message.”

“We try to create circumstances where they can learn by experience,” noted David.

One way he does this is by bringing his players together before they kick a football around for the day. He’ll introduce a topic like gender stereotypes and ask if anyone thinks there are activities only made for girls or only for boys.

“I don’t explain much at the beginning, I just put the subject on the table,” explained David. Then as the training session progresses, David integrates his topic into the day. Maybe he’ll tell the players only those with red shoes can score, or only the tall ones can play up top.

“By doing this, they start to see how inequality feels like,” noted David.

After the session, he rounds up the players again and they debrief about the topic of the day, discussing how they felt and working on how to treat others with compassion. 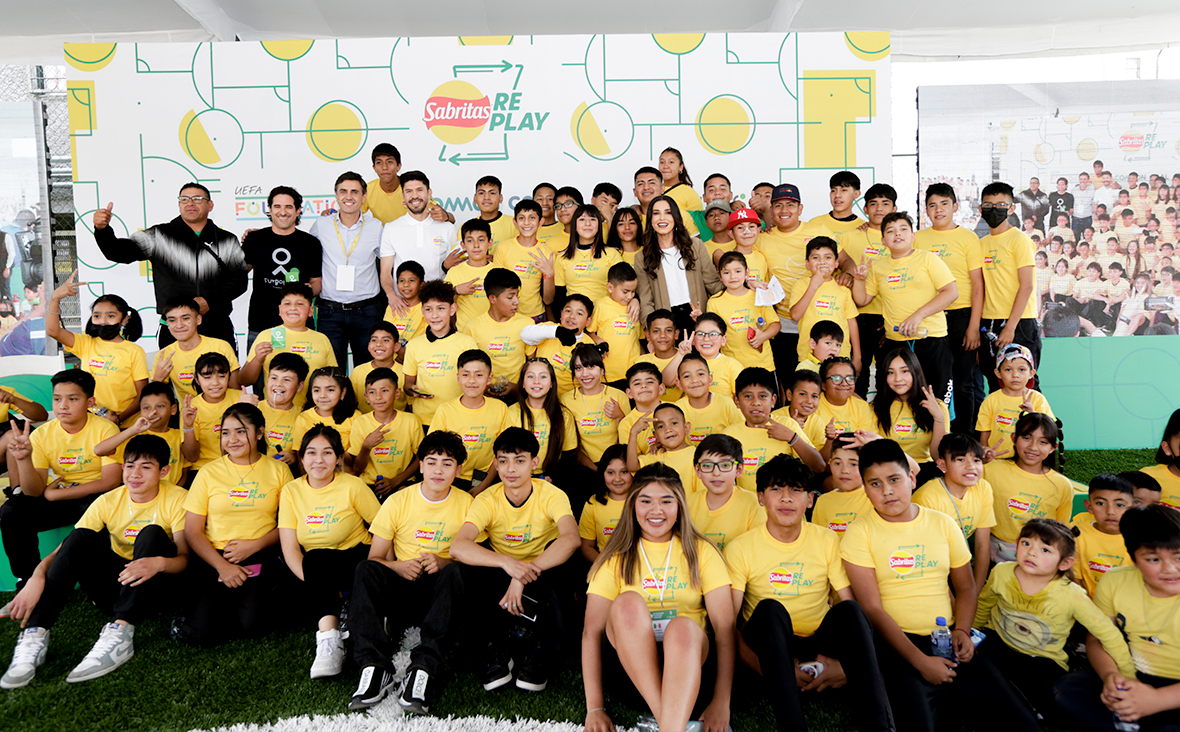 It’s through trainings like these and showing up for the community that Fútbol Más has garnered a lot of respect in the neighbourhood. Many residents lack access to clean drinking water and drug trafficking is prevalent.

“Even though I live an hour away, I feel really welcomed in the community,” said David.

“It’s something special, not everyone is accepted here. It’s not because of me, it’s because of what Fútbol Más does.

“Iztapalapa is a rough neighbourhood. But for me, it’s not dangerous because I have my Fútbol Más shirt. When they know you are part of the organisation, you have a shield.”

David hopes through Fútbol Más’ work on the pitch, young people will be enabled to see the world from a different perspective.

“Living in a tough neighbourhood, people feel like they need to fight for everything,” said David.

“Step by step we can transform people’s behaviours. At Fútbol Más we do everything without asking for something in return. It helps break habits and people realise they don’t need to be defensive.

“When people come to our pitch, they are relaxed. They are free to be whoever they want to be.”