On the morning of the 25th of February 2007, 11-year-old Asmahan Mansour lined up alongside her teammates to play a game of football. They had travelled roughly 200km from the Canadian capital Ottawa with their sights set on a regional tournament in the Québécois city of Laval. Yet before the referee had even blown the whistle to start of the match, Mansour’s game was over.

Instead of being dispossessed by a well-timed tackle or denied by the fingertips of a diving goalkeeper, it was the rules of the game that prevented her from playing. Her aptitude to play, rather than being determined according to her performance on the pitch, was judged upon her religious beliefs.

For on that day, like every other day, Mansour was wearing a headscarf as an expression of her Islamic faith. Deeming her hijab unsafe, the referee told Mansour that she would have to remove it in order to play, citing the “no-headgear” rule as set by the sport’s governing body, FIFA.

In protest to the grey area of the regulations spelling Mansour’s exclusion from the game, the team immediately withdrew from the event. Understandably devastated, Mansour was determined to seek different answers.

Though simply adhering to his own interpretation of the rules, unknowingly the question the referee had posed to young Mansour required arbitrarily choosing between faith and football. Mansour’s refusal triggered a seven-year-long campaign so that such choices would no longer have to be made.

First, she took a claim to the Canadian Soccer Association, who to her surprise stood firm with the ruling. Dissatisfied and determined to root out the core reasoning behind measures with such restrictive implications, she turned to the lawmakers themselves with the hope of overturning the precedent now set in Canada.

FIFA officials remained resolute in accordance with the original British rules which first organised the sport. “If you play football there’s a set of laws and rules and law four outlines the basic equipment," said Brian Barwick to the global press, chief executive of the English Football Association. The dismay of the young Mansour was evident, telling CBC News: “I thought it was disappointing because I thought I would actually make a difference but I didn’t.” 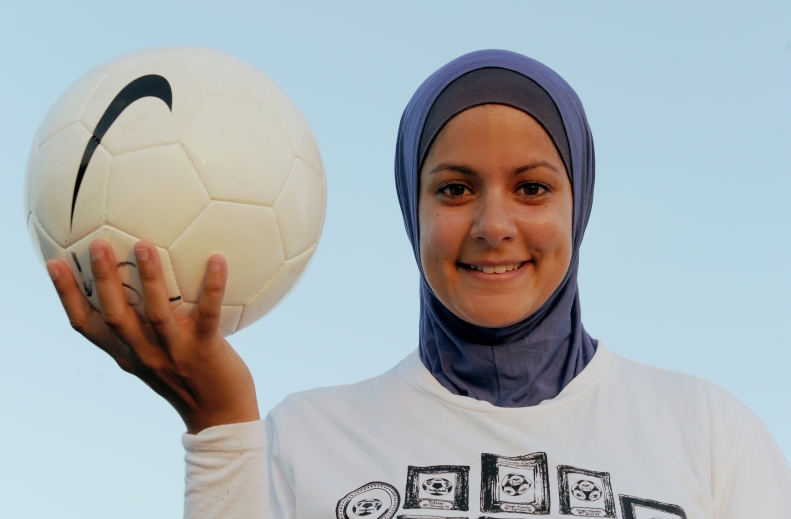 By the stroke of a pen, all religious head coverings were at once ostracised from competitive football. In what was never intended as a measure to exclude organised religion, collateral damage to the blanket measure also discriminated against the Turban worn by Sikh men as well the Kippah by Jewish men.

The decision failed to anticipate the significance and the incendiary implications towards Muslim women, leading to accusations of endorsing a gendered form of Islamophobia and revealing a dire need to modernise the game.

Calls of religious insensitivity were emboldened by reports from sports activists Shireen Ahmed and Khadijah Emmanuel, questioning FIFA’s initial reasoning of “religious symbolism” as an argument against head coverings prior to then drawing on “health and safety” concerns.

Falsely implying the hijab is an explicitly religious symbol, fails to acknowledge that the decision to wear it is dependent on culture; chosen upon personal preference and interpretations of Islamic modesty as laid out in the Quran.

More disheartening for those implicated, was learning the eventual decision not to cite religious reasoning, wasn’t due to a more nuanced religious understanding but for the seismic task of monitoring and enforcing action against every tattoo or goal celebration holding faithful iconography already present in the professional game.

Four years passed without resolution, only for the law to be once again put to the test. In 2011, the Iranian women’s national team faced Jordan in Olympic qualification, becoming victims of similar protocol. Moments before kick-off, the Iranian players wearing hijabs were given their marching orders. Visibly distraught, they too left the pitch but this time in tears.

For campaigners, the regulations remained an attack on the civil liberties; how could the freedom of choice be taken away by the discretion of individual referees – upon an interpretation – who had never been or never would be implicated by such measures. The diversity of the game’s broad appeal wasn’t being reflected by both rule-makers and enforcers.

Iranian women's national team players leave the pitch in tears prior to their 2011 Olympic qualifier versus Jordan in 2011. Photos: Images courtesy of Getty Images

In came prominent supporters including Moya Dodd, football official, lawyer and former player on the Australian National Team, alongside player and activist Assmaah Helal from the organisation Football United. They charged the then recently elected vice-president of FIFA, Prince Ali bin al-Hussein of Jordan, to take the issue to the executive committee. He agreed and, together with support from all corners of the game, displayed a remarkable sense of unity impossible to ignore.

From household premier league names, such as former New Zealand men’s captain Ryan Nelsen, to the entire 2011 world cup-winning Japanese women’s team, football lovers came together for the right of Muslim women to choose. Activist and goalkeeper of the Jordan National Team, Mesada N. Ramouninieh, rapidly gained 65,000 members on Facebook for her “Let Us Play” campaign, while partnerships between Right 2 Wear, the United Nations and FIFPro emerged to find solutions.

Sportswear companies, such as Capsters and ResportOn pitched in, helping find a solution through clothing designs corresponding to the safety recommendations. A prototype was swiftly produced and put forward, subject to a two-year trial period. Meanwhile, Muslim sportswomen continued to be side-lined, their rights as players precariously left shrouded in mystery.

Finally, after two long years of waiting, FIFA delivered its verdict on 1st March 2014. Secretary General at the time Jérôme Valcke announced: "female players can cover their heads to play", granting what they described as “worldwide authorisation”.

One of the deciding factors, FIFA later confirmed, was the upcoming U-17 Women’s World Cup to be hosted in Jordan in 2016; arriving as needed acknowledgement of aligning aspirations of the game’s geographical and participatory expansion with rightful consideration of all potential newcomers.

Jordan's Tasneem Abu Alrab (C) vies for the ball with Spain's Maria Blanco Armendariz (R) during the opening football match of the Women's World Cup Jordan 2016 between the countries' national teams in the capital Amman, on September 30, 2016. Photos: Images courtesy of Getty Images

When hosts Jordan faced Spain on the 30th August 2016, it was the first tournament under FIFA’s jurisdiction to be played on middle-eastern soil. In front of an Amman International Stadium with barely a spare seat in sight, the Jordanians perched themselves, arm in arm, on their own goal-line.

Amid the roars of rapturous delight, the momentous occasion called for one last prayer. While some players closed their eyes, facing downwards towards clasped hands, perhaps lost in internal thought, some looked skywards, eyes transfixed upon the sky, speaking visibly aloud.

Amongst those, were two players exercising their right to wear a hijab. More than demonstrating the beautiful diversity of religious expression, it symbolised a new era of harmonic coexistence between faith and football.

On this occasion, the referee would blow the whistle to the start of the match. Regardless of the score, the game was a victory for the advocates and players who had toiled for seven years, refusing to sacrifice their right to play. To this day, all but one nation has pledged its full support of the rule change. The French Football Federation remains the only governing body keeping the ban in place, leaving the hijab lodged within the nation’s commitment to “respect the constitutional and legislative principles of secularism”.