A little over three years ago, artist and historian Stuart Gibbs believed he had uncovered the first black woman to play professional football.

While trawling through the annals of female footballing history for an upcoming exhibition, Gibbs stumbled across an article in the Sterling Sentinel dating back to 1896. In it, the author referred to “a coloured lady of Dutch build” playing in goal for the inaugural British Ladies’ team in 1895; the player was thought to be Carrie Boustead.

For seven months, Gibbs was sure his revelation was ground-breaking, with Boustead representing a lost pioneer. That was until his colleague eventually found a team photograph, showing Carrie Boustead as white.

The player thought to be Boustead was more Bootle build than Dutch and by no means foreign, going by the name Emma Clarke. Though usually an attacker, the case of mistaken identity was down to her playing versatility, on some occasions taking to the pitch as a goalkeeper.

Emma Clarke was born in Liverpool in 1876, as one of fourteen children to parents William and Wilhelmina Clarke. Clarke’s younger sister, Jane, also featured for the team, and Gibbs thinks there may have been a third sister, Mary.

Merseyside could be a very hostile place for young Black people to live. Black people were considered second-class citizens and there was very little solidarity between white and Black communities. In Jacqueline Jenkinson’s book ‘Black 1919: Riots, Racism, and Resistance in Imperial Britain’, she details one occasion where 120 Black men were fired from a factory in Liverpool after white co-workers refused to work with them.

At the age of fifteen, Clarke began working as a confectioner’s apprentice. Her footballing education, however, was forged on the cobbled streets of her local neighbourhood.

Her official football career dates back to her first appearance for the British Ladies, the first women’s association club team founded in 1894 by the enigmatic character going by the pseudonym Nettie J. Honeyball and patronised by Scottish writer, war correspondent, and feminist Lady Florence Dixie.

Through an interview with British tabloid newspaper The Daily Sketch in 1895, Honeyball declared she formed the club “with the fixed resolve of proving to the world that women are not the ‘ornamental and useless’ creatures men have pictured.”

On Saturday, 23rd March 1895, Clarke lined up for the inaugural exhibition match, representing the ‘South’ in their game against the ‘North’.

“All through the afternoon”, wrote The Daily Sketch, “train-loads of excited people journeyed over from all parts, and the respectable array of carriages, cabs, and other vehicles marked a record in the history of football. Yet all that this huge throng of ten thousand had gathered to see was the opening match of the British Ladies’ Football Club.”

Though Clarke’s ‘South’ team fell 7-1 to their northern opponents, the game is recognised as the first fully fledged women’s game played under the football’s founding association rules.

Enthusiasm in the late 19th century for the women’s game was high, with thousands of supporters attending matches, prompting widespread press coverage albeit often drenched in ridicule.

Football was not seen as a sport for females, with women’s teams even forced to wear bonnets, specially tailored high-heeled boots, and corsets.

The first record of a women’s football match dates back to 1881. Clarke would only have been five years old when the international match between England and Scotland took place on 9th May 1881 at Easter Road, the home of Hibernian F.C. Eleven days later, another game played in Glasgow in front of 5,000 people was abandoned after hundreds of men invaded the pitch and the players had to flee in horse-drawn carriages.

Despite discarding corsets and being able to wear more practical boots, bonnets were still being worn in Clarke’s matches and caused much disruption. The game was regularly stopped if anyone headed the ball so that players could fix their bonnets before the play resumed.

The Manchester Guardian reported at the time that: “Their costumes came in for a good deal of attention (...) one or two added short skirts over their knickerbockers. When the novelty has worn off, I do not think women’s football will attract the crowds.”

A year after Clarke’s debut, both Emma and her sister Jane joined Graham’s XI on the tour of Scotland in 1896, led by Helen Graham Matthews, though famously known as Mrs. Graham, who lived just a few streets away from the Clarke family home.

Clarke and her sisters would have earned around a shilling a week each playing football – plus food and lodgings – a substantial sum for a working-class family of the time.

The tour frequently drew larger audiences than their male counterparts, with the team playing in the country’s most prestigious stadiums. From Newcastle United’s St. James’s Park, to gracing the hallowed turf of the home of English football at the old Wembley Stadium.

Little is known of Emma Clarke’s life in or away from football after 1903. However, in terms of giving women, and particularly Black women in Emma’s case, a chance to display their sporting talents in the public domain, the tour and the team itself was ahead of its time.

The game continued to flourish until the early 1920s when the Football Association invoked a ban on the women’s game, stating that, “the game of football is quite unsuitable for females and ought not to be encouraged”. The ban lasted fifty years until 1971. 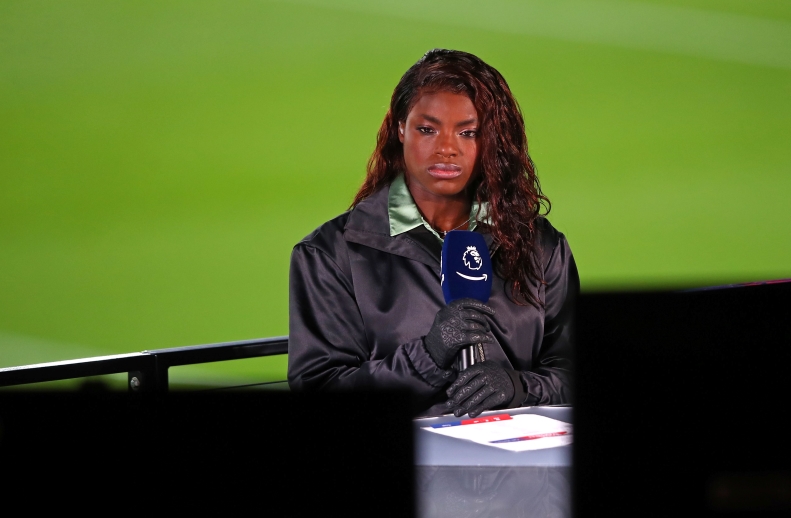 In 2017, Aluko shed light on the racial discrimination and bullying she faced as part of the English Women’s National Team. While Rachel Yankey, England’s most capped female international, when growing up in London was forced to shave her hair and give herself a nickname (Ray) to play on a boys’ team. In her professional career, she would deal with multiple incidents of racial abuse from supporters in the terraces. “You can heckle us if you want if we’re not playing well, but to heckle us because of the colour of our skin is simply unacceptable.”

Pond, a former Tottenham Hotspur Women’s player, places this form of marginalisation down to the attitude that once heard her referred to by a coach as, “not looking like a footballer”.

In Britain, there are over 200 statues of sportspeople, yet only two depict women. Though in 2019, thanks to a campaign following Emma Clarke’s chance discovery, a commemorative blue heritage plaque celebrating her historic contribution to women’s football was erected at the home of former club Crouch End F.C. in London.

Emma Clarke is no longer remembered as “the fleet footed dark girl on the right wing”, as phrased by the South Wales Daily News, but rather as an inspiration to young girls playing football today. Role models are hugely important for the next generation of players, and while the representation of Black female players is steadily improving, there is still much work to be done.