Whether serving his country at the World Cup or serving food to his local community during a global pandemic, Anthony Sanneh understands the meaning of making a difference.

Like all professional footballers, the ex-United States international, D.C. United, Hertha Berlin, and FC Nürnberg defender’s 17-year playing career was defined by it.

Sanneh’s impact however, unlike most, wasn’t ever confined to the pitch and remains that way since hanging up his boots.

Since the outbreak of the coronavirus, The Sanneh Foundation – the football for good organisation he founded in 2003 – has placed all of its football-based activities on hold and orchestrated a community-wide support network, serving the most vulnerable in the Twin Cities area.

The organisation is part of an effort providing 100,000 meals a week for families in an area spanning St. Paul and Minneapolis, Minnesota.

With the country approaching its estimated peak of infection rates, Sanneh said he and his team feel responsible for what they are: “required to do, should do, and can do, to get ahead of the curve. 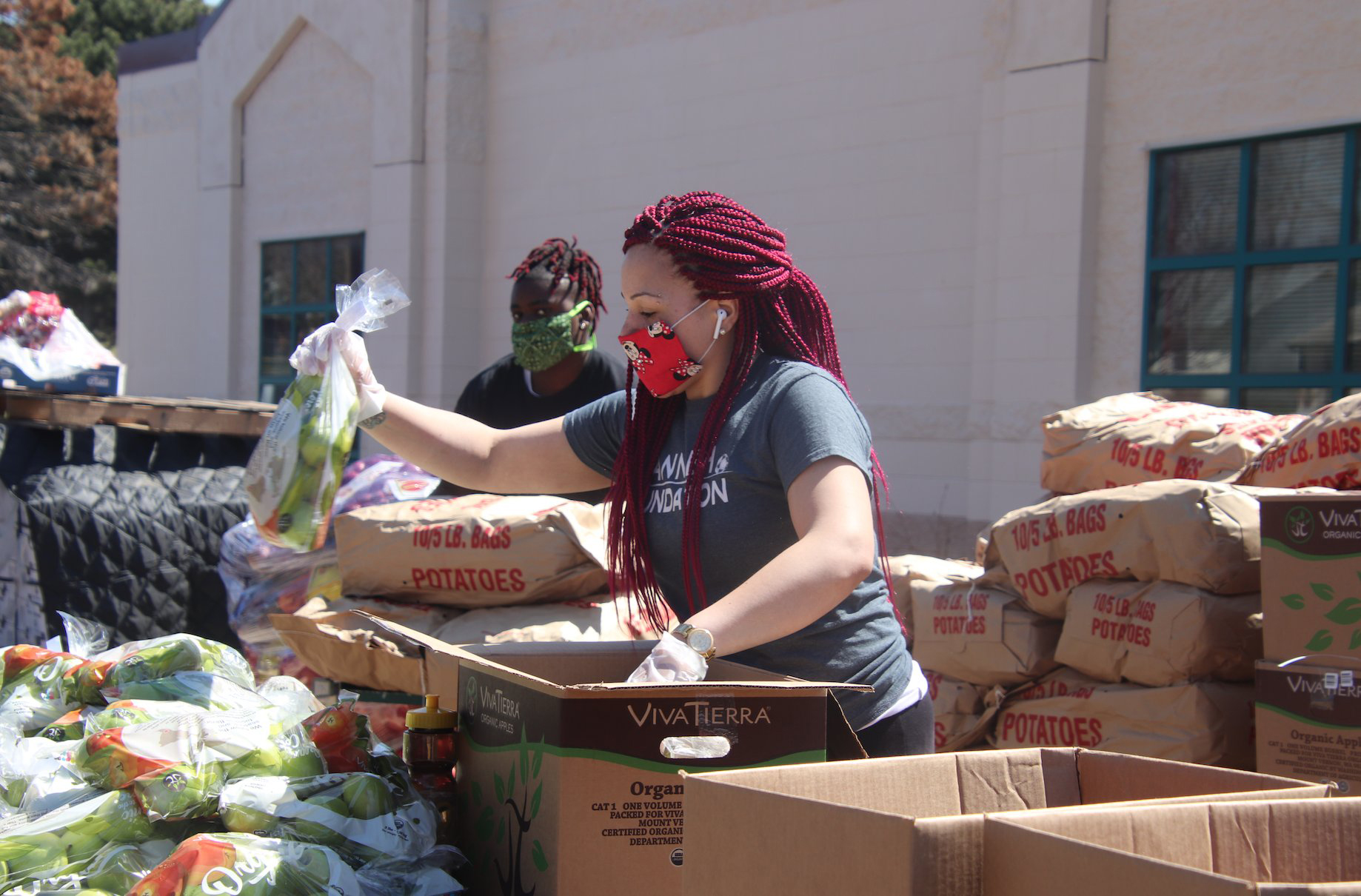 A member of staff prepares food at The Conway Community Center. Photo: The Sanneh Foundation

“When kids can’t go to school, they don’t have access to food, healthcare, mentorship, or simply positive people,” said Sanneh. “We serve young people, so naturally the first question was how do we support them and help them stay connected.”

Amid the nationwide school closures and lockdown measures, the effects of the coronavirus left a “vacuum”, causing “real ruffles because no one really knew what to do.”

With the organisation’s work done through in-school or after-school programmes, providing diverse young people, often from marginalised “urban and immigrant communities”, with mentorship and the tools to develop as individuals, this new reality would only exacerbate pre-existing inequalities.

But instead of becoming inactive, Sanneh and his team decided to fill the void.

“We looked at all the ways this [crisis] is going to affect our community and thought: ‘Where are we going to get the biggest bang for our buck?’” he said. “We asked ourselves: ‘What is going to have the biggest impact?’” 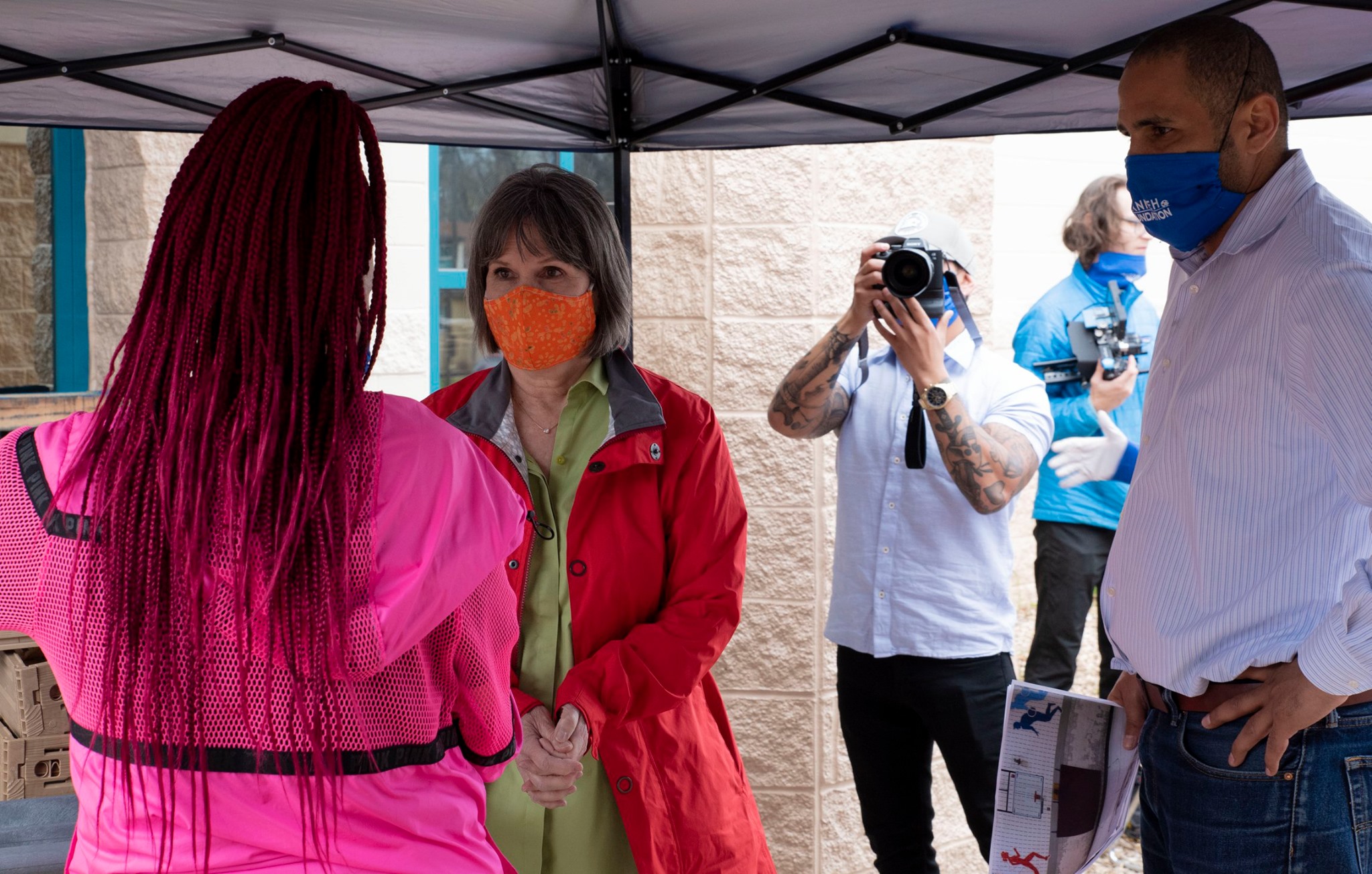 The answer was food. And not only for local students, but the wider community as well.

Despite the uncertainties of economic implications facing all businesses, staff were told their positions were secure and jobs were repurposed.

Where local food security agencies have lost their volunteer workforce due to fears of spreading the virus, staff from The Sanneh Foundation have filled in, managing in some cases to triple the amount of food being distributed.

“We have another group partnering with local food shelves to deliver food. For the elderly, we pick it up and drop off it to their houses so they have access to it,” said Sanneh.

Recent drone video footage showed cars lining the nearby streets of the local neighbourhood, pulling up to the front doors to receive fresh produce and essential items. 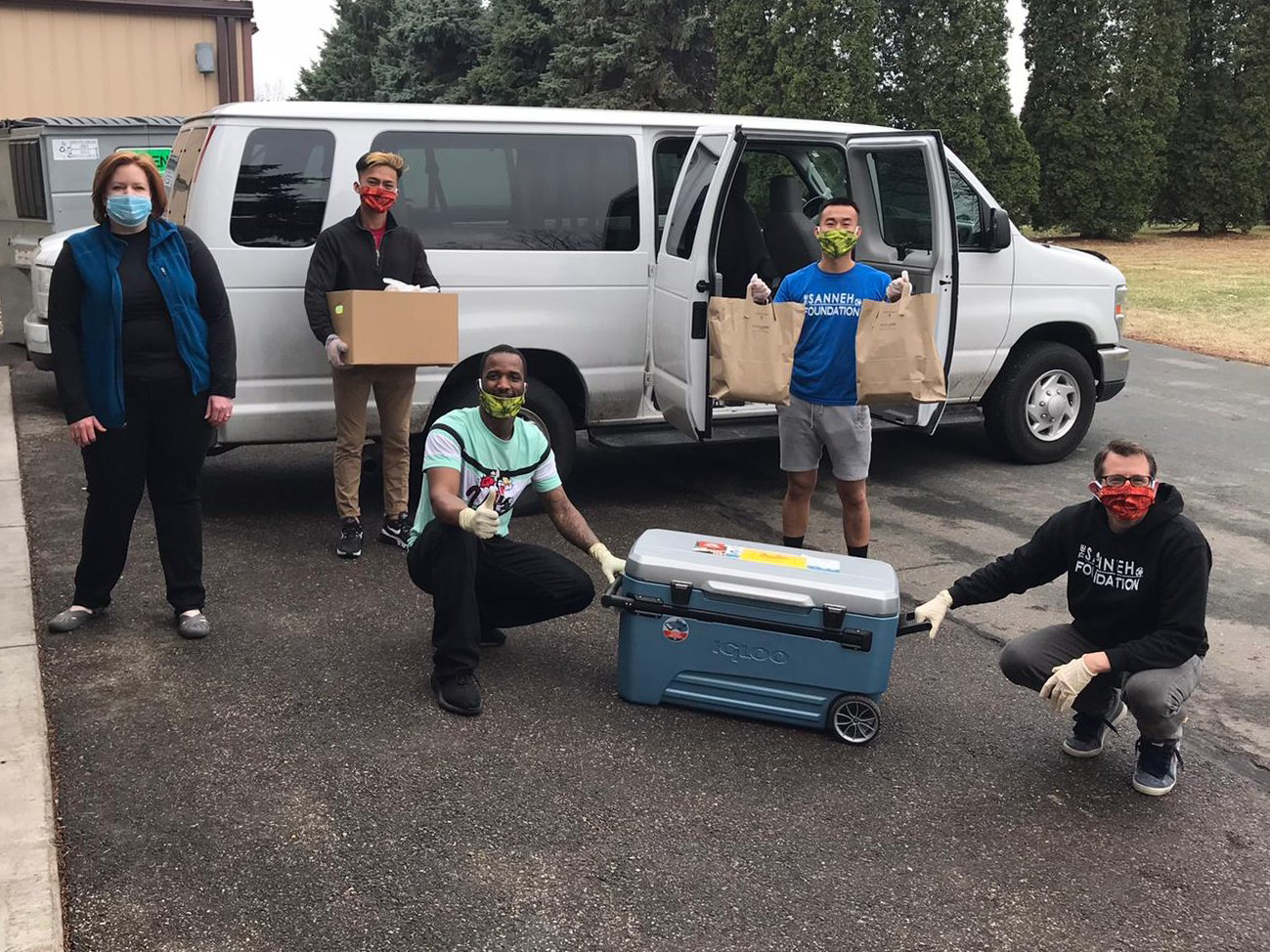 Each week the lines are getting longer. The need is real and it’s growing.

Locally, Sanneh and his team’s efforts have been well documented, from the regional press and their own social media channels.

The reason being, said Sanneh, “is to help the team take ownership of their particular role. To help them embrace that they are part of something much bigger than themselves.

“We don’t post how many meals we serve to brag. Our team is made up of school mentors, one minute they are offering academic support to students and next thing they’re packing bags of lettuce.

“We look at ourselves like a football team. If you’re the right back and one of your jobs is defending crosses, while that might not seem exciting, come the end of the game and the score comes up in your favour, all that work gone unnoticed suddenly matters.”

Whether its bags of lettuce or crosses, like a defender judged upon statistics, now is the also the time for The Sanneh Foundation to cement its place as a vital asset in the community.

At the height of his career after being named one of the USA’s best players at the 2002 FIFA World Cup, locally known ‘Tony’ wanted to leverage the positive change football had on him for others.

Since then, young people have benefited from the organisation’s weekly community programming, warm meals, free community camps and academic intervention.

Yet with exterior funding efforts often dependent on impact statistics, the crisis response is one way to number an element of the organisation’s work, which often can’t be.

“You can measure the amount of food you give families but you can’t measure the sense of belonging we give the community,” said Sanneh.

Where the absence of playing football has left a hole, instead of rueing the lack of physical activity, it’s the sense of belonging found in being part of a team that Sanneh worries about.

Though The Sanneh Foundation’s work has been taken online – creating virtual support groups for the different teams through messaging and mentoring from afar – to him it can’t replace actually playing football.

In Sanneh’s eyes, more than anything, the sport is about relationships. And a “two-way one” at that. 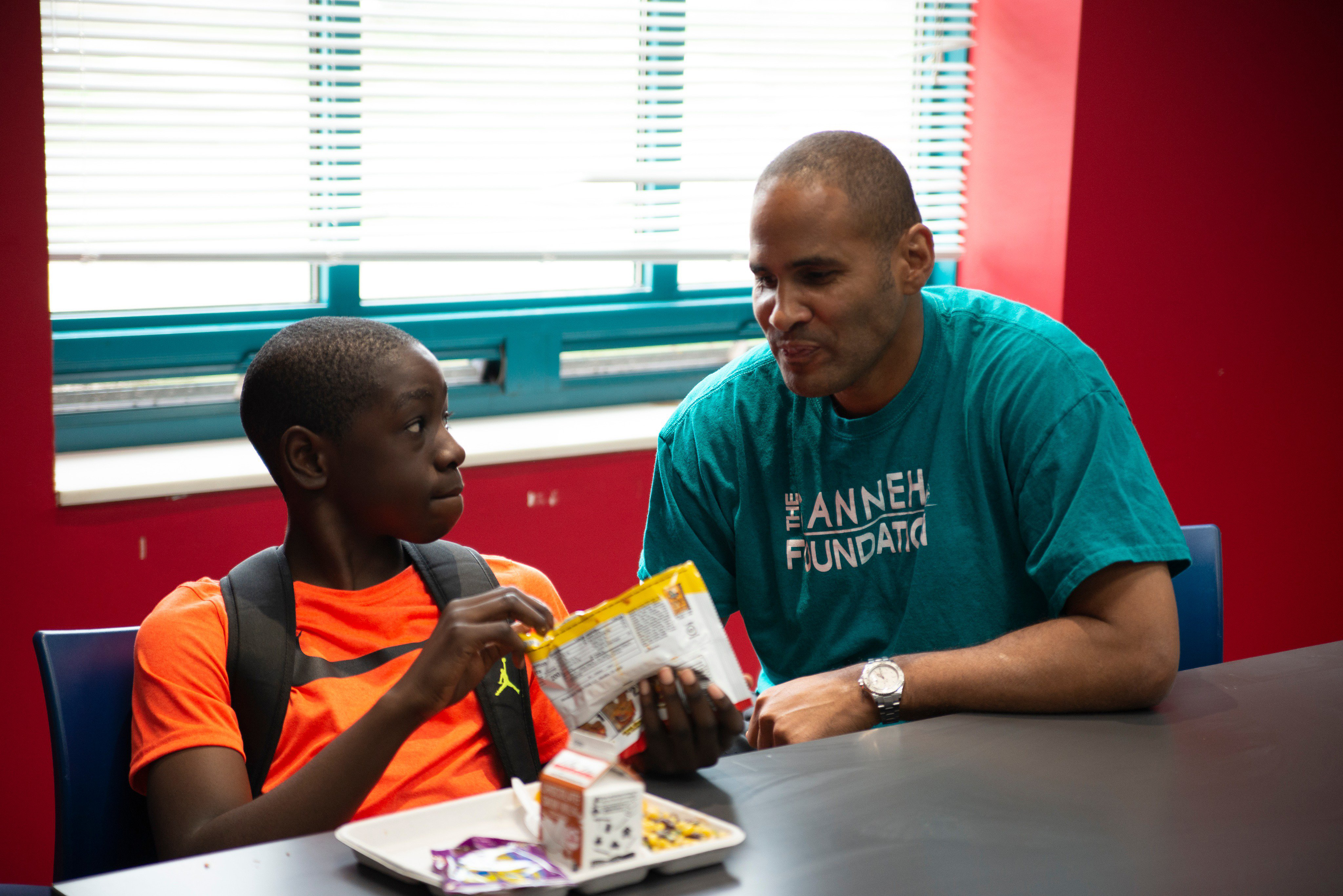 “For 22 years I moved around every three or four,” said Sanneh. “I moved around so much that eventually I realised that I really wanted to be home.” After officially retiring from professional football in 2010, he did. And became The Sanneh Foundation’s full-time President and CEO.

“I realised football wasn’t so much just about playing, as it was about the relationships that supported me throughout my career,” said Sanneh.

Since then, he has helped the organisation grow a reputation for being inclusive, responsive, and ready to adapt to the community’s needs and shortages.

The staff’s job of engaging and supporting young people through football is not purely about mentoring or teaching, but rather building relationships. The impact of which is mutually beneficially and its value found in a more connected community.

“Right now, nobody knows the answer. But seeing our staff not only provide a service but in the manner they do it, puts us in a unique position where people look to us for help.”

“Being an ex-athlete, we’ve set very high standards and we do work extremely hard. It’s a job, but so is being a footballer. And that involves more than working a six-hour day,” said Sanneh.

“As a pro you’re only on the pitch for a certain amount of time yet there’s a whole lifestyle to support that.” 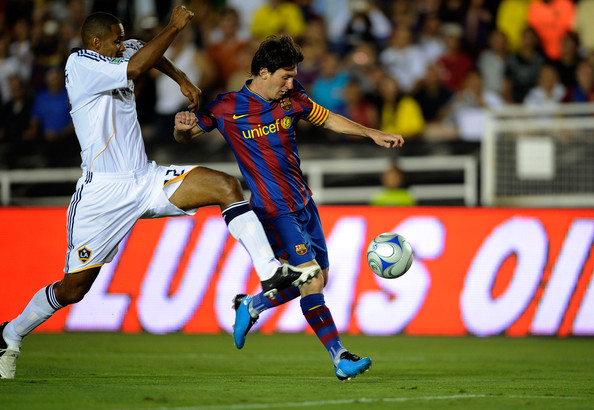 The Sanneh Foundation’s title as a community organisation is not one taken lightly and serving the community is what staff have bought into. Whether that means placing their own safety at greater risk, the greater good of serving the public remains paramount.

When asked about the pressure of that responsibility, again Sanneh turned to football.

“Pressure depends on how you look at it,” he said. “For me my best games were at the World Cup or playing in the Camp Nou against Barcelona. The bigger the game, the bigger the chance to perform.”

And, like playing, his motivation to pursue a career in social development stems from: “going to sleep every night knowing you’ve directly impacted people’s lives.”

“When you go to bed smiling because you’ve scored two goals or served 8,000 pounds of food, if you wake up the next morning and you're not the best person in your position at practice, you're not going to be on the field and yesterday doesn’t matter.

“The world is a place where we all lean on each other and that’s part of life,” said Sanneh. “We all need to be able to ask for help, in a way that doesn’t feel shameful.”

Beyond the crisis, he hopes the organisation’s efforts highlight the “two-way relationship” football can offer.

“People rely on sports as a way to get social or emotional relief and connectedness to their community,” he said.

But, likewise, when and where it can, “sport holds a responsibility to give back.”