Playing for my Community

I have realised every one of us has the ability to plant seeds; seeds that become a harvest for others to reap. It just so happens that football is the seed that keeps on giving. Not just for me, but for those around me.

You see, here in Cape Town everybody knows about Hout Bay United Football Community, and that just goes to show how much the organisation cares about players like myself and the environment we come from.

If we eat, everybody eats. That’s the way it is – we look after each other.

I don’t think that was ever more clear than during the last few years; it was important for us to support our community when things weren’t so great.

Players got together and delivered food to people in the community that lost their jobs during the first COVID-19 lockdown. We supported each other, just like a community should.

Seeing smiles on people's faces made us grateful for what we were doing and to be in the position to contribute to our home.

It’s those kinds of things that make being a part of HBUFC just makes sense to me.

When I was growing up, I looked up to players from my community who played in higher leagues. They showed me a glimpse of what was possible and motivated me to push myself.

I want to do the same for the young players in my area. I want to show them that with hard work you can go places. Regardless if you come from a small community, your dreams can be as big as your drive.

But, believe me, I wasn't always expecting to have such a strong connection with football.

There was a time I didn’t love the game.

It was a passion my father wanted to pass down to me. He used to wake me up every day during the winter at 6 am before the sun came out and make me practice and work on controlling the ball. I was five or six years old at the time and didn't like it at all.

But, when my father passed away, my main focus became my family and football.

Life wasn’t always easy for my family and me.

I have a younger sister and, when my mother lost her job, I would come home worried and stressed, asking myself how and what we were going to eat. Money was tight so I dropped out of school to pick up a job at a hardware store — selling materials like cement and greeting customers. Far from where my passion lies. 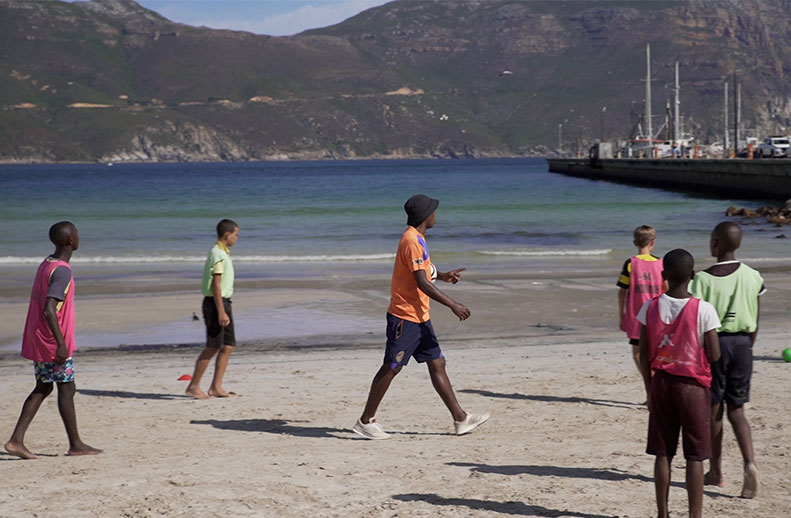 From not earning enough at that store — to now getting paid for not only playing football but also coaching younger football players that have the same fire and hunger as me.

My players believe in me because they saw me doing it yesterday, they know my story. This builds trust and motivates them to keep going.

But the players also motivate me – it works both ways. I’m inspired by their drive and the changes I’ve seen in the game.

Coaching is different now. In my time, if you made a mistake or maybe made a wrong pass, the coach had you do push-ups or run five laps like on the pitch. But now, we sit them down, stop training, and then explain it again and let them try – teaching with practice rather than punishment.

Aside from what I have learned on the field, Hout Bay United Football Community has taught me many life lessons. One of those is that you can't always be on the winning team – you also have to accept losing. I´ve learned to be okay with that.

I am still not satisfied and I don’t think I will be anytime soon. For one, I would also love to represent my country. But that's a long way to go. I know that timing is everything, and for these next five years, I want to see my team in the higher league. But most importantly, I want to see my community continue to grow and thrive.