This article first appeared in German on Kicker.de. You can read that piece in full by clicking here.

In 2017, Spanish player Juan Mata (Manchester United) was one of the co-founders of Common Goal. It is an initiative that encourages football professionals, managers, officials and clubs to donate at least one percent of their income to social projects worldwide.

The number of members is steadily growing, VfL Wolfsburg is now the first German club where both a female and a male player are members of Common Goal. Danish international Pernille Harder preceded Austrian player Xaver Schlager. The VfL duo sat down with kicker for an interview.

More and more players are signing up: In Germany, Mats Hummels, Serge Gnabry, Dennis Aogo, Daniel Didavi, Alexander Esswein, Julian Nagelsmann and Jürgen Klopp are among the prominent supporters of Common Goal. Now, Xaver Schlager, another Bundesliga player, has joined the initiative. The Austrian who plays for VfL Wolfsburg is the latest member of the movement that addresses social problems and supports social projects through the donations of its supporters and with the power of football. 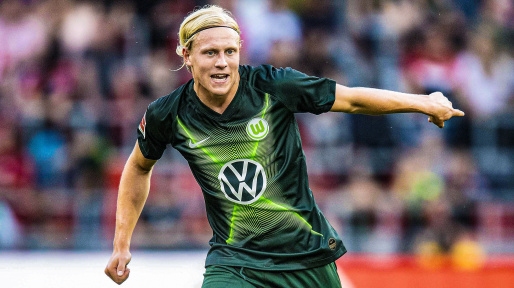 Xaver Schlager, why did you decide to join Common Goal?

Xaver Schlager: I had been searching for an initiative to support for a long time, also before the Coronavirus pandemic. As a professional footballer, I am doing well financially and would like to give back and do so in a purposeful way. With Common Goal I have found an excellent organisation with which to do just that. The whole package [of what they offered] was a good fit.

That means?
Schlager: At Common Goal, I can decide where my money goes. There are many different possibilities. That idea convinced me and it doesn’t hurt any of us professional footballers to give one percent of our salary.

Pernille Harder, you have been part of Common Goal since last August…

Pernille Harder: And I haven‘t regretted it! I was also convinced by the fact that I could choose which project to support.

Which one was that?

Harder: I’m supporting the Play Proud project, which enables coaches all over the world to train young people in a setting where it doesn’t matter what your sexuality is, where you come from or how you live and are as a person. When a photo went around the world during the 2019 World Cup of me kissing my partner Magda Eriksson after a game, there were so many positive reactions. I realised then that I could be role model for many other people and be a support to them.

Xaver Schlager, do you already know which project you will be supporting?

Schlager: I am still discussing it [with the Common Goal team], but Corona is, of course, an important issue right now.

Does it make you feel good to make a contribution?

Schlager: I am convinced of the power of football, of the impact that we can achieve with it. It can take people out of their sometimes challenging day-to-day lives and make them feel good [at least] every once in a while. Football can be a welcome distraction and football can be a support.

Harder: Let’s imagine that every football player worldwide gave back one percent of their income, then that would amount to a lot to make the world better in many areas.

Pernille Harder, are you happy that the Common Goal family now has a further addition from Wolfsburg?

Harder: It’s a good sign and great that we are the first Bundesliga club to have members from both the men’s and women’s teams. We lead [by example] both on the football pitch and beyond it. I hope that many others will feel encouraged to follow suit. It’s also nice to see our WhatsApp group growing.

How do you mean? Is it true to say that Jürgen Klopp, Mats Hummels, Serge Gnabry, Juan Mata, Giorgio Chiellini, Pernille Harder, Xaver Schlager und Co. are in a joint chat group?

Harder: Yes, that’s right. But it‘s not like we are writing messages non-stop. The group keeps us up-to-date with what is happening at Common Goal. And, when a new member joins, they are of course welcomed. We are like a family.

Schlager: Then I am looking forward to hopefully soon being included in the group (laughs).