"I do it for my voiceless sisters"

“What is freedom?” asked Popal while reflecting on her lifelong journey fighting for it.

To her, “Freedom is the ability to create your own path. To believe in your heart of hearts that you are the writer of your own journey.”

And that is exactly what she has been championing for since she was a little girl in Kabul. Not just for herself, but, as she says, for all her, “voiceless sisters.”

“For 90 minutes people come from all over the world, thousands of them flood into stadiums for the love of the game. There is power in that,” noted Popal.

“We need to use that power in the right way — to give back to society, support communities, and change lives.”

Last month, Popal’s tireless work promoting gender equality and creating safe spaces for all, was honoured by UEFA as she became the first woman to win the Equal Game Award.

“This award is not just for the work I’ve done, but it’s a recognition for all girls believing in themselves and using their platform to spark change,” she said.

“I’ve always wanted to be an example to girls in communities and cultures that have a similar history and background as mine, where girls are told they can only be followers, to DARE them to lead.”

But it hasn’t been an easy road for Popal. Hand-in-hand with her achievements have been sacrifice, struggle and, above all else, an unwavering perseverance to making the world a better place. 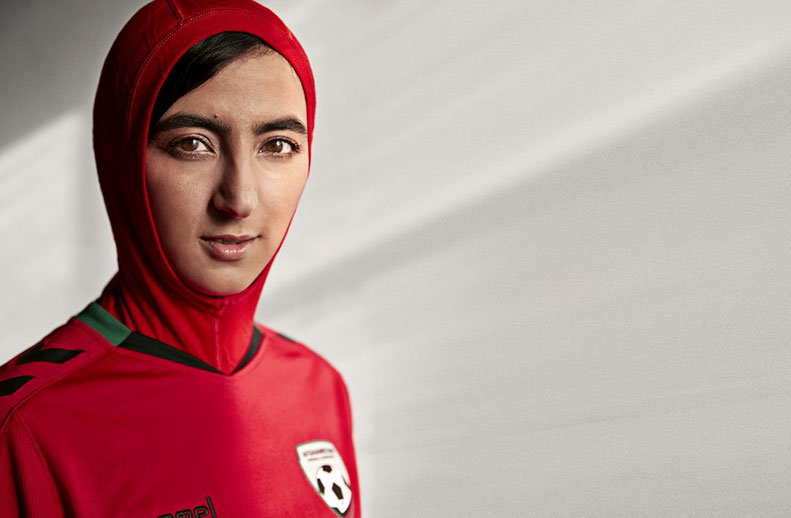 “In the beginning I hated everything about being a girl. I felt like it was taking everything from me; that my gender created barriers,” said Popal, thinking about the different ways she was treated compared to her brothers growing up.

In Afghanistan, as she describes, “men decide everything. And football, according to these traditional values, was seen as incompatible with being a ‘good girl.’”

But she did not let that stop her.

Determined to play the game she loved, 14-year-old Popal set off with a mission to create safe spaces for girls to play.

Going door-to-door with her mother, who helped first introduce her to the game, the Popal duo, armed with their unbeatable passion for the game and desire to open doors for girls, worked on convincing dads and sons to let their girls play.

“That was my introduction into activism,” she said.

“I quickly learned to change mindsets, to shift culture, and create history, you need a group of people, you can’t do it on your own.

“You need to be strong, have confidence and courage in order to change the world. There are so many sacrifices you have to make to make change happen, that at times you may question yourself, but it’s bigger than you.

“What I’m doing, it’s not for myself, it’s for future generations. I do it for all my voiceless sisters.” 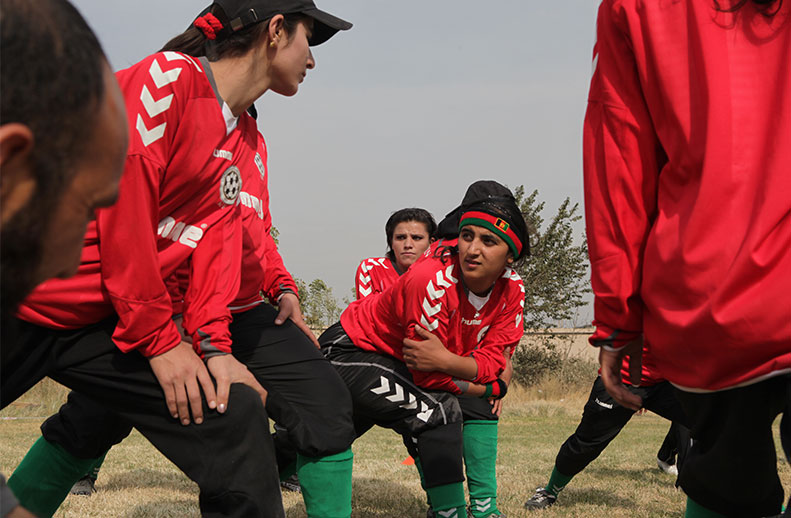 Keeping that vision in mind is what helped Popal get through the dark times.

“Many times we were attacked. Told women cannot walk properly, how can they play football? We had rubbish and rocks thrown at us, and were repeatedly physically and mentally harassed. But it was all worth it,” said Popal.

“Football taught me to love being a woman. It showed me the power and strength of women uniting.

“I think female footballers are the strongest human beings. Think of all the hurdles and obstacles they have to overcome just to follow their dreams and write their own journey.”

In 2007, Popal was determined to establish a women’s national team in Afghanistan.

As she says, “We knew arguing for equal rights was a battle we would never win and the doors for women would remain closed.

“So we went in with a tactic we thought might work. We said, ‘Imagine if we had a women’s team. Imagine how much positive press coverage it would bring to the federation. No one writes about the men’s team, but here, if you let us play, you will be the hero’.”

And with her leadership, she helped form Afghanistan’s women’s national team.

“I remember the feeling when we put on our jerseys and represented Afghanistan for the first time. It was one of the most incredible feelings I’ve ever had, one of the proudest moments of my life,” said Popal while replaying Afghanistan’s first friendly match against Pakistan in her mind.

“When the anthem started, we all had tears rolling down our face. Just knowing how difficult the journey was, it was so emotional. Every single day we faced negativity from our family members, society, and the federation, but we stayed united and we persevered. We didn’t need to play the match, we had already won.” 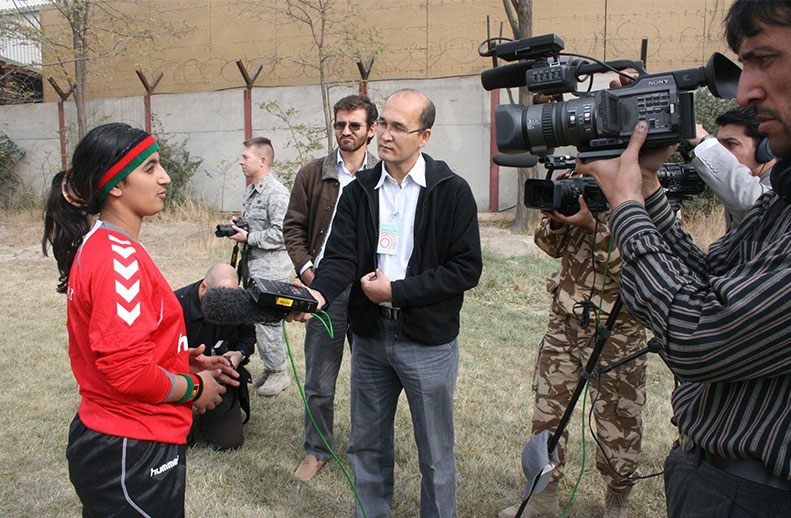 But Popal wanted to do more than play and captain the national team. She felt she could do more.

She wondered how her voice could go beyond the pitch to be a role model for all.

Besides football, Popal decided, media was the second strongest tool to help others.

“I began using my platform to bring attention to the violence and discrimination women were facing.

“The stronger my voice got, the more enemies I got. It became dangerous to walk outside. I kept asking myself, is it worth it? What about me?

“But then I would connect back to my purpose of using my voice for my voiceless sisters. That’s how I kept myself motivated. I told myself, someone has to make sacrifices so that the others can participate in society and have basic human rights.”

In 2011, after years of standing up for girls and women inside of her home country, the death threats became too grave a risk to her life.

“I had to make the tough decision to leave Afghanistan to continue my mission,” she said.

“No matter where I am, or what people do, no one can take away my purpose. Whether I’m in Afghanistan or a refugee camp, I can still empower people.” 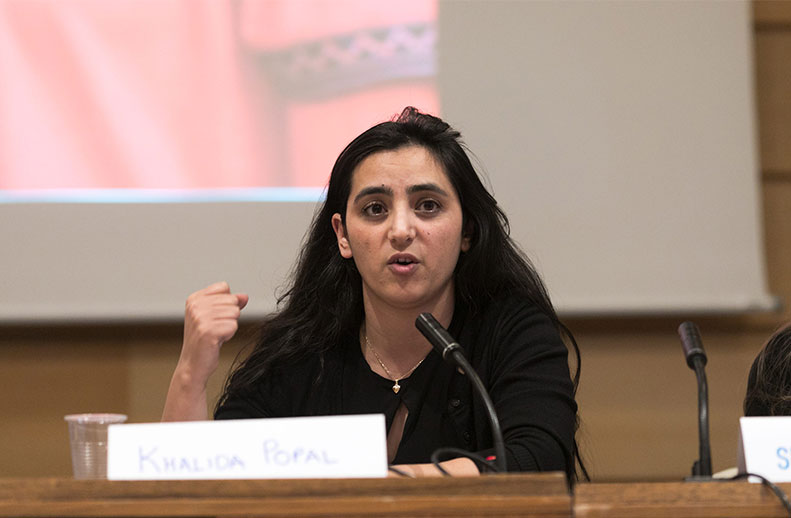 Since settling in Denmark, Popal has continued her mission through launching Girl Power Org in 2014. The football for good organisation located in Denmark, Germany, Jordan, Turkey, Greece, Afghanistan, and Pakistan, uses the power of sport and education to empower, connect, and unify minority girls and women.

“I want to show girls their strength, that they too can be leaders and football can be a great tool for them in life,” commented Popal.

When the Taliban took control in August, she once again rose to the occasion.

“I had to step up and use the power of my voice and platform to advocate for my sisters’ lives,” she said.

“With the help of the international community, we managed to get hundreds of national team and youth team players and their families out of Afghanistan and resettled in Australia and Europe.

“I am very engaged with them, connecting them to resources and helping them use football to heal from their traumas.”

Popal believes football has the power to change mindsets, not just for individuals but for governments as well, and hopes to inspire others to use their platform for the greater good.

“I envision a day when women all around the world realise their own power and the strength that comes from standing together as sisters,” said Popal.

“I will continue working towards that day and towards a world in which no group, government, or patriarchal culture will be able to dominate, oppress, or violate the human rights of half of society.”