Tessel Middag’s piece on the Euros, football history, and the future of the game

Tessel Middag, professional footballer for Rangers FC and Common Goal member, reflects on how the women's game can create a different future for football.

For a long time, the narrative about the women’s game has been how it can catch up to the men’s game but maybe we’re framing it in the wrong way…

With the women’s game, we can think about it differently – we have the chance to create a game that puts people and planet over profit.

Football was invented by men. The culture was set by them, the industry dominated by them, and the women’s game repressed by them.

Why should the women’s game mirror the men’s? Instead, let’s take the opportunity, while the game is still developing, to decide ourselves what we want the game to be.

If you ask me how I’d like to see the women’s game evolve, I would say let’s choose a different path, our own path, and let women’s football be the beacon for a better and more inclusive global game.

Women’s football is in the midst of history. Records are being broken everywhere with club and country teams drawing crowds by the tens of thousands. Last month, on a cloudy Manchester night, Old Trafford shined bright as nearly 70,000 fans piled into the Theatre of Dreams to watch England take on Austria for the Euro opener. The match smashed the tournament’s previous record of 41,301. But that record didn’t even stand a month. Tickets for the final at Wembley, with 87,000 seats, sold out within an hour.

With all this momentum, now is the time to think about the future of the game. 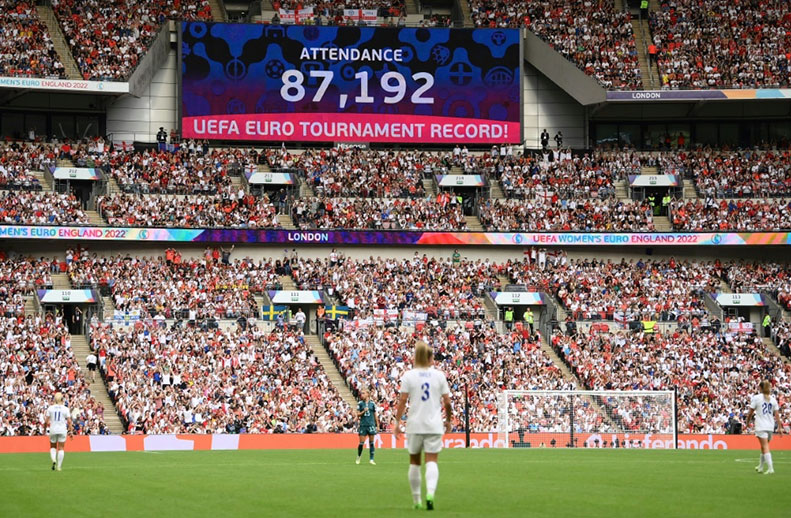 My whole life I’ve loved playing and watching football. But I agree with writer and journalist Suzanne Wrack when she describes it as increasingly removed from the realities of ordinary people. “Ticket prices, jaw-dropping wage demands, more and more tenuous sponsor deals, the cost of food and drinks in grounds, corruption, and mismanagement in the game’s governing bodies: all these things are serving to isolate the very fans and communities that built the game,” argues Wrack.

I have no interest in any of this. Football for me is not about making an astronomical salary that can be found in the men’s game, it’s about playing a game I love. That’s not to say there aren’t improvements needed when it comes to money in the women’s game. Even earning minimum wage is not a given for every professional female player, leaving many needing to work other jobs to pay their bills.

If we want the level of the women’s game to keep accelerating, the right financial investments are needed so players can fully focus and rest around training sessions and games. With these steps, the potential is huge. After all, half the population is female and football is the most popular sport in the world.

But I don’t think a central pillar of the women’s game should be exuberant wages or expensive ticket prices. The aim of women’s football should be to become truly accessible, inclusive, and sustainable. 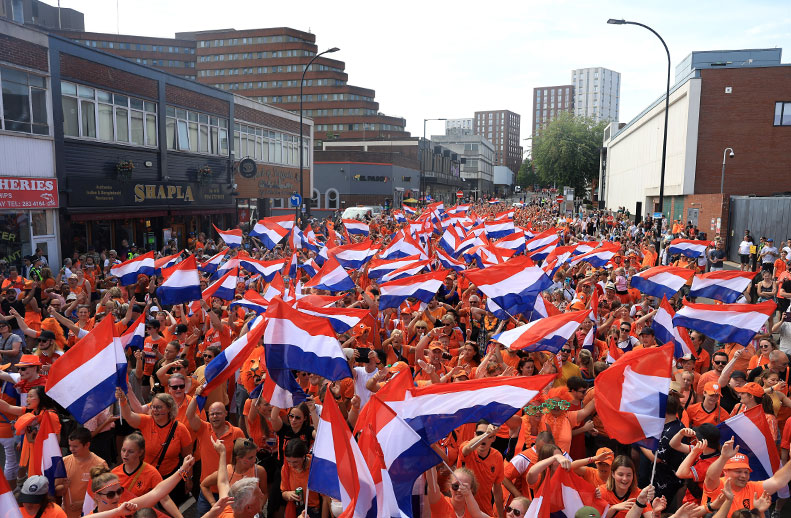 Tessel Middag's home team, the Netherlands, at the Euros

I think we are getting there. Tickets for the Euros started at £5 meaning the whole younger generation, not just the ones with wealthy parents, could come to games, see their role models, and get inspired. I remember growing up and watching games live. The energy of fans and being so close to the players was contagious, it made me want to train harder and was a crucial component to following my dream of playing professionally. I would like the women’s game to be a space for everyone to enjoy the game.

For me, a key part of this way forward is through giving back.

There’s a long history of this in the women’s game. In WWI when men went off to the front lines, women’s football found space to flourish. Matches drew huge crowds with The Dick, Kerr Ladies, the most notable team in England at the time, selling out 53,000 seats at Goodison Park with a reported 10,000-15,000 fans turned away due to capacity limits.

During and after WWI, huge sums of money were raised during women’s football matches. But not for players’ and investors’ pockets – for campaigns. By watching a women’s game, you weren’t just enjoying a spectacle, you were also contributing to the war effort. As sports historian, Jean Williams argues, “It showed that women’s football could capture the hearts and finances of tens of thousands of football fans.”

Today we can learn from this lesson. Football can be an effective tool to contribute to social causes. I think the Common Goal movement, which I joined in 2017, can play a crucial role in forming the women’s game into a field that gives back, builds up communities, and promotes inclusivity and equity. For me, it’s the perfect outlet to unite players who want to take a stand and help make our game one that serves everyone, not just the lucky ones. This is the essence of what I think women’s football has the potential to be.

It’s crucial that we recognise football doesn’t exist in isolation. It’s at the heart of society. It has the potential to shape and influence the world. And if we recognise that, and do something good with it, the women’s game could be a truly special place.

So let’s not copy the men’s game. Let’s ask ourselves what we value. What sets women’s football apart today is its approachability and its inclusive culture. It’s crucial to maintain that, despite increasing commercial interests. Because of its unique position and background, the women’s game can take the lead in showing a different future for football.