How Dick, Kerr Ladies helped save Women’s Football in England

Last summer, as the sun mellowed around the Parc Olympique Lyonnais in France, a referee’s final whistle pierced its way through the hearts of the thousands of England fans in the arena.

The whistle drew the 2019 Women’s World Cup semi-final to a close and ended England’s dreams of a World Cup trophy.

However, while the Lionesses succumbed to a 2-1 defeat to eventual winners the United States, they left the field as record breakers – with an unprecedented 11.7 million people tuning in from the UK.

Though the moment was one laced with disappointment, with the dust now settled it is hard not to reflect on the journey of the women’s game and see how far it has come since the dark days of a nationwide FA ban.

For more than 50 years’ women were dispelled from the football pitches of England - but small pockets of pioneers persisted, with the Dick, Kerrs Ladies team from Lancashire showing that women’s football is a game to cherish, to celebrate, and a game that would endure.

With the start of The First World War, the men of Britain were sent to the front lines in droves, and the English men’s football league was suspended for the years of 1914-15.

Called upon for their labour, women poured in to the country’s munition factories – and soon onto its football pitches.

As a means of escaping the horrors of war, welfare officers, responsible for the health of women in the factories, suggested sport – especially football –  with the added plus of keeping fit.

As such, from the 900,000 women who had come to work in the munition factories, around 150 teams were established across England, each representing their own factory.

At first, women’s teams played against each other as well as teams of wounded soldiers, with profits from ticket sales going towards charities for local hospitals, ex-servicemen, and needy children – drawing large crowds in the process in the wartime absence of spectator sports.

While the matches did, over the years, generate what would today be 14 million in funds for charity, word would soon spread regarding the quality of football on show.

Of all the teams that formed between 1914 and 1921, the Dick, Kerr ladies of Preston stood out – the team who would go on to achieve national fame in the process.

They played their first organised game in 1917 against St Helen’s Ladies – a team that would become a rival with fiercely contested battles between the sides a common occurrence.

The game was a tremendous success with more than 10,000 spectators showing up to watch and also donate.

Under the tutelage of manager Alfred Frankland, they went from strength to strength, becoming inundated with invitations to play up and down the country.

With such notoriety, they were able to attract some of the most talented players in England away from other teams.

Though the team was brimming with talent throughout, there was one player widely considered the best in the country.

Lily Parr was an outside-left by trade and possessed inimitable skill and raw power and is accredited with scoring more than 900 goals during her football career.

Such was the strength in her shot that she is said to have broken the arm of a male goalkeeper who made the unfortunate mistake of saving her penalty.

Many years later, both herself and Dick, Kerr’s teammate Joan Whalley would be inducted into the National Football Museum Hall of Fame – but it was Parr who became the first ever woman to do so.

That the women’s game escalated so quickly between 1917 and 1920 was a testament to the skill and talents of the Dick, Kerr Ladies.

During one particularly memorable season in 1920, in what was an unofficial woman’s league, the Dick, Kerr Ladies scored an astounding 133 goals in just 30 games.

Perhaps their most noted match took place on Boxing Day of 1920, when 53,000 fans filled Everton’s Goodison Park and the Dick, Kerr team defended their reputation as one of the best teams in England, defeating familiar faces in St. Helen’s women’s team 4-0.

With 14,000 eager spectators being locked out of the stadium due to over-capacity, the women’s football league was no second-best sporting event. It was the sporting event.

1920 also saw the French team journey over to the UK and take on the Dick, Kerr Ladies in a four match exhibition in what has been recognised as the first set of women’s international fixtures.

The Lancastrian women did not disappoint, finishing the series with two wins, a draw and a solitary loss at London’s Stamford Bridge. 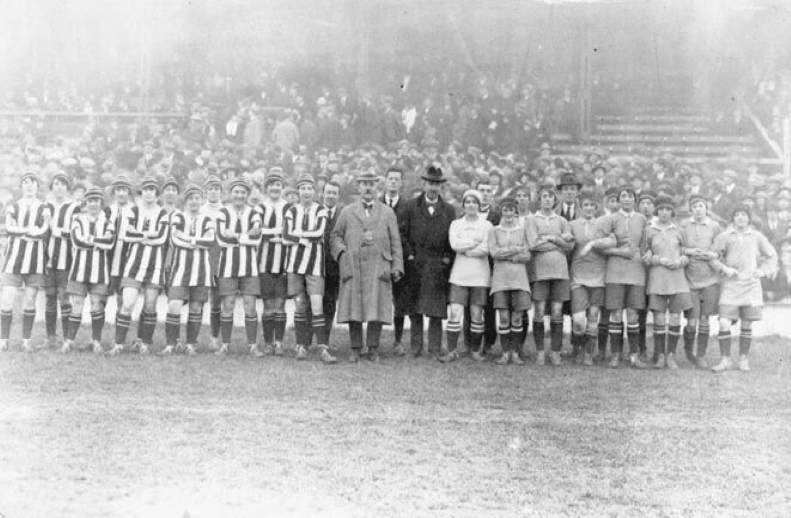 But with the end of World War I and the return of England’s men from the front lines, the success of England’s women’s football league was coming to be thought of as counter to women’s societal roles.

Conscious that the men’s league was drawing less attention than the women’s the FA banned the use of its fields for women’s teams – effectively ending any possibility of female participation in the game.

It cited the game’s nature being “quite unsuitable for females and ought not to be encouraged” in order to initiate the return to England’s more traditional understanding of gender roles.

This was never going to be accepted by the Lancastrian women’s team.

"There's always America," said Alfred Frankland, manager of Dick, Kerr's, and across the Atlantic they went.

In 1922 they travelled across the Atlantic to play a series of matches and, upon arrival, were met with the news that they would in fact be coming up against men.  Playing with their usual verve and vigour, they charmed the American people, gaining their respect wherever they played.

"I played against them in 1922," recalled goalkeeper Pete Renzulli. "We were national champions and we had a hell of a job beating them."

In the mid-1950s, long-serving manager Alfred Frankland became ill and most of the secretarial duties were taken over by former player Kath Latham.

When Alfred Frankland died in 1957, Kath took over the full time role of manager of the Dick, Kerr Ladies – becoming the first female manager known to date.

While the FA ban would last 50 years, the Dick, Kerr Ladies fought on against all adversity to continue to play football exhibitions around the world and across the UK for decades, raising money for charity until 1965 inspiring millions of girls and women in the process.

In 1971, after having already done considerable damage to the existence of women’s football in England, the FA ban was finally lifted in response to football’s increasing popularity among girls and women in the 1960s in the wake of England’s 1966 World Cup triumph.

Now, many years later, England boasts more than 3.4 million female footballers across the country, with those numbers ever growing.