How Football Helped Heal a Nation

As the final whistle blew at the Amahoro stadium on July 6 2003 in Kigali, Rwanda, pandemonium ensued among the 30,000 packed inside. But, unlike the panic-induced outpouring of emotion that once filled this stadium and others like it, these cries were of joyous celebration.

A one-nil victory for the Rwandan men’s national team against heavy favourites Ghana secured progression to the African Cup of Nations finals for the first time ever — and only time since.

The result, however, will forever be immortalised by its historical significance.

As the jubilant scenes on the terraces rolled out into the surrounding streets and spread across the entire country, the game signified that the country’s darkest days were behind them.

For both Tutsi and Hutus, once warring ethnic groups, were now dancing together as one. And the horrors inflicted upon the nation through genocide in 1994, killing up to 800,000 predominantly Tutsi Rwandans, would be confined to the past.

“I don’t want to sound like one is exaggerating but that moment added a lot to what was happening: a process of bringing the country together,” told President of Rwanda, Paul Kagame to filmmakers in Amazon Prime’s docuseries This is Football.

Long before European colonisation of Rwanda in the mid-19th century, there existed a gulf in social class between the Hutus and the Tutsis. The Tutsis tending to own land and the Hutus predominantly farming it — but it was because of the Europeans that their social class differences were exacerbated and when colonisers began to encourage Tutsi rule.

When Rwandan independence was achieved in 1959, the Tutsi minority became increasingly marginalised by the Hutu government.

By the 1990s, under the tyrannical reign of governance of President Juvénal Habyarimana, the divide had grown stronger and the prominence of the anti-Tutsi Radio Télévision Libre des Mille Collines had ensured that divide turned to violence.

Not willing to surrender, Rwandans who had been exiled to Uganda united behind the banners of the Rwandan Patriotic Front — a Tutsi-led rebel force who flooded past the border in great numbers, engaging the oppressive regimes forces in fighting.

Tutsis, however, would pay the price for this challenge towards the state, even those with no connection to the troubles were declared its enemies. Political killings became a regular occurrence and civilians were harassed on the streets.

Even in those times, a month before the Rwandan Genocide began in 1994, football at the Amahoro Stadium served as the briefest of unifiers amid the backdrop of bloodied violence.

Amid the chaos rumbling in the underbelly of “God’s Garden of Eden,” football club Rayon Sports — the most supported club in Rwanda — hosted Al-Hilal of Sudan in the African Cup Winners’ Cup, with Rayon winning the tie.

Often criticised for their ethnic diversity, they were now being championed for their success and Hutu and Tutsi, soldiers and civilians, celebrated together.

Even President Habyarimana got involved, inviting the team to a televised reception in honour of their unprecedented success.

But the celebrations would be short-lived and soon the insurmountable hatred that had been slowly threatening to spill pools of blood across the surface of Rwanda would erupt violently around the country.

Exactly one month on from Rayon’s success, President Habyarimana’s plane was shot down from the sky, killing all on board. While those responsible have never come forward, for Rayon Sports goalkeeper Eric Eugène Murangwa it was clear who would get the blame.

“I was happy this dictator was dead,” he told Daniel Callan from social justice media publication New Frame, “but I knew who would be blamed. I knew battle lines were being drawn.”

Like the flames that spewed from the wreckage of Habyarimana’s final resting place, the anti-Tutsi sentiment that had spread like wildfire among the Hutu extremists engulfed Rwanda, bringing forth the first day of genocide.

Yet, like a number of Rayon Sports players, photos of Murangwa in action for the team that were being celebrated as heroes only a month earlier would save his life under times of attack from Hutu extremists.

One of those players was Baptiste “Baptista” Kayiranga, who had scored that day against Al-Hilal.

When driving with a friend to his village to hide from the violence, Baptista was harassed and attacked by militia, certain he was going to die, he was recognised by one of the soldiers.

“When we arrived, the militia knocked on the window and ordered us to get out of the car. They stole all our possessions,” he told This is Football.

“They hit me across the side of the face with a machete, I thought I was dead. Then all of a sudden, a small boy came over, and he said ‘isn’t that Baptista?’

“He remembered the match between Rayon Sports and Al-Hilal, and a soldier said: ‘oh, Baptista, it is you. Hey bring back his things.’”

“I showed him the photo of me with the President.”

That photo saved his life.

For most, football would take a backseat among the cacophonous chaos of murder, hatred, and despair. But in the form of stadiums like the Amahoro it still had its part to play.

Throughout the genocide, football stadiums across Rwanda served as would-be safe havens in the eyes of those desperately fleeing towns and villages where they were being hunted down and slaughtered.

The Amahoro itself became a UN protected site, and hosted thousands of mainly Tutsi refugees over the three months of hell.

Commander of the UN Peacekeeping Mission in Rwanda, Roméo Dallaire, wrote that the sanctuary of the stadium “saved these civilians from certain death.” 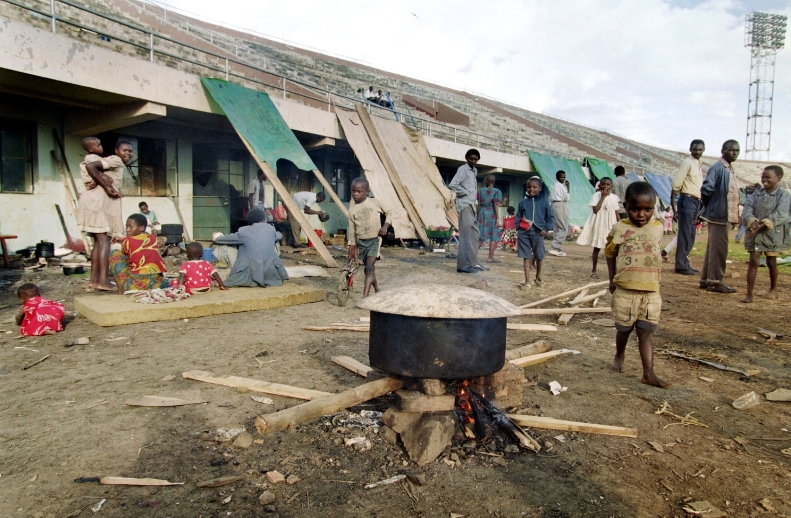 Following what is now known as the 100 days of Slaughter, rocking the country to its core, people found football to be a source of liberation from the trauma they faced in the massacre’s aftermath.

Just one month after the last bullet was fired, the first public gathering after the end of the Genocide in 1994 was a match between Rayon Sports and Kiyovu Sports — which helped to bring many out of hiding and reunite people with loved ones.

Hundreds of games soon popped up on makeshift pitches around the country serving as a source of escapism from the internalised horrors that remained and as vehicles of reconciliation for survivors, families of the dead, and many of the perpetrators.

At the behest of the new government’s attempts to re-build a country, a number of tournaments at local and national level were organised to help to heal the nation and encourage national unity.

Through investing money into football, the game was part of a concerted effort from the government to help create a peaceful society. By trying to remove the Hutu-Tutsi linings and instead by referring to all as simply Rwandans, the game helped people come together for a common cause.

For years this continued and the sense of unity progressed but the standout moment came in 2003 at the famous Amahoro Stadium against the giants of Ghana.

“It is a game I will remember for the rest of my life, it was the perfect chance to rewrite our history,” said Baptista.

“During the genocide, the Amahoro stadium had been used for the refugees — who took advantage of its safety in order to survive.”

Because of the divisive nature of Rwandan society at the time, developing a competitive national team was near impossible.

Nine years on from the devastation incurred by the genocide the squad was made up of Tutsi and Hutu players — all united behind the national flag.

Their opponents that day were a footballing powerhouse in comparison to Rwanda, having previously won the competition four times since its creation in 1957. 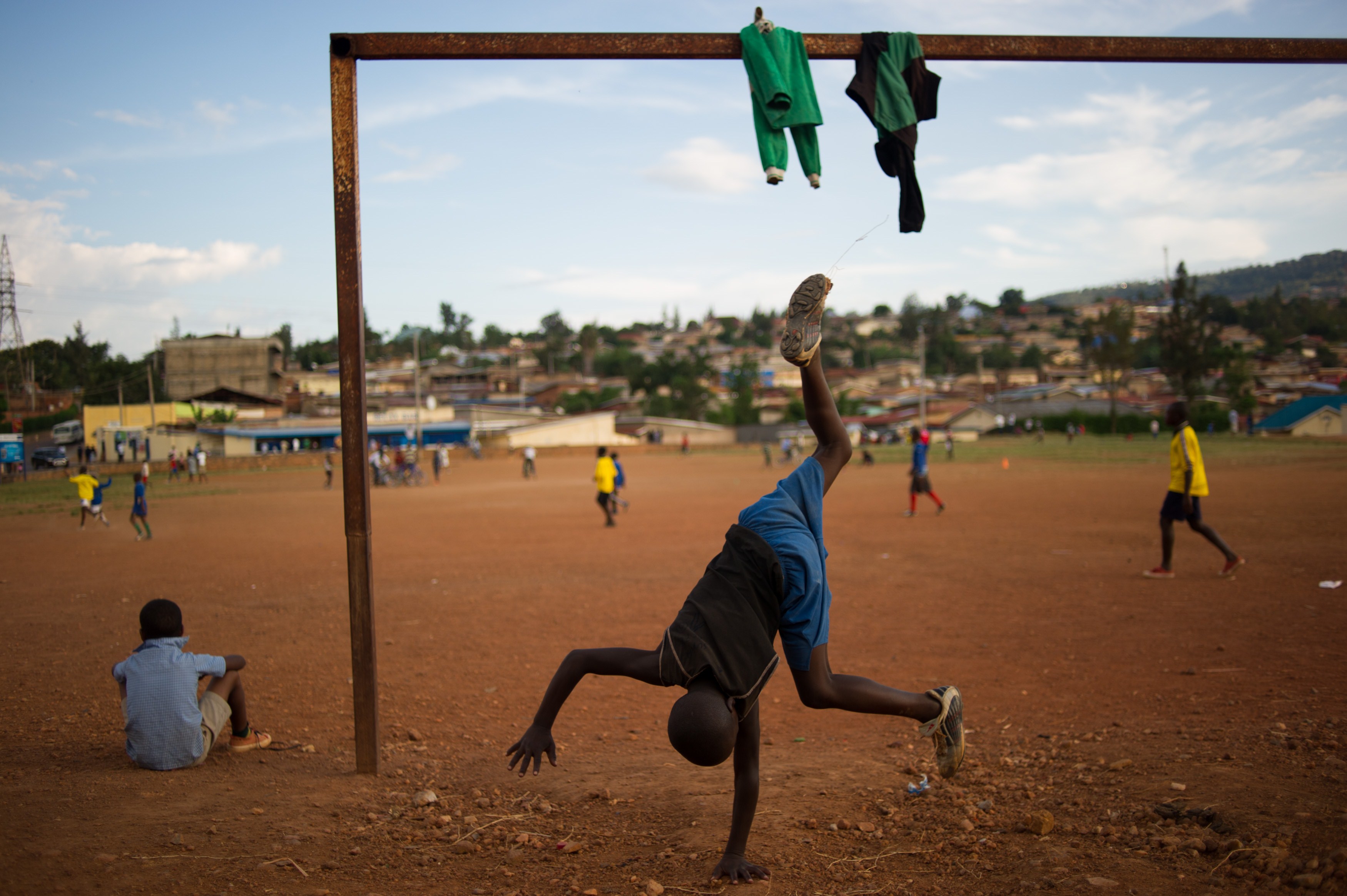 But the Rwandans were not to be deterred by their fearsome reputation and in the 49th minute took the lead through a Jimmy Gatete header at the far-post.

The stadium erupted, but it was nothing like the scenes witnessed when the referee’s whistle called an end to the game signifying Rwanda’s African Cup journey was only beginning.

Fans invaded the pitch. Tutsis hugged Hutus. Hutus hugged Tutsis. And though the past will never be forgotten President Kagame felt that for the country’s unity going forward, it was a priceless moment.

“This team had all these backgrounds of our society, but as a country everybody rallied,” he said.

“From nowhere, this nobody stands up, to this big giant of football. This means everything. It means you can win in other cases of adversity.”

And while the after-parties around the country were said to have lasted for days, peace among the Rwandan people remains to this day.