Euro 2020 is over. And with it football’s fairytale summer ended on a sour note. The final whistle at Wembley was followed by online racism — once again bringing the subject to the  fore.

Though football itself does not produce racism. It is a space where one of modern society’s most repugnant ills continues to rear its ugly head. Time and time again.

In a tournament supposed to be remembered as a celebration of the 60th anniversary of the UEFA European Football Championships, the first of its kind Pan-European format hosted across 11 different cities, will instead be forever tainted by hate.

Although Dublin was originally intended to be one of the 12 hosting cities, Ireland became the sole country from the original dozen to be stripped of its hosting rights due to Covid-19 protocols.

While an outlier when it comes to allowing fans into stadia, like London, Dublin is home to its own fraught exchange between racism and football; on the one hand playing host to a space of racial resistance against different forms of prejudice and the other an incubator to where the abuse takes place.

Similar to Dublin’s doors to the tournament, lockdown restrictions also forced Sport Against Racism Ireland (SARI) — a football-based community organisation — to shut up shop to the game. 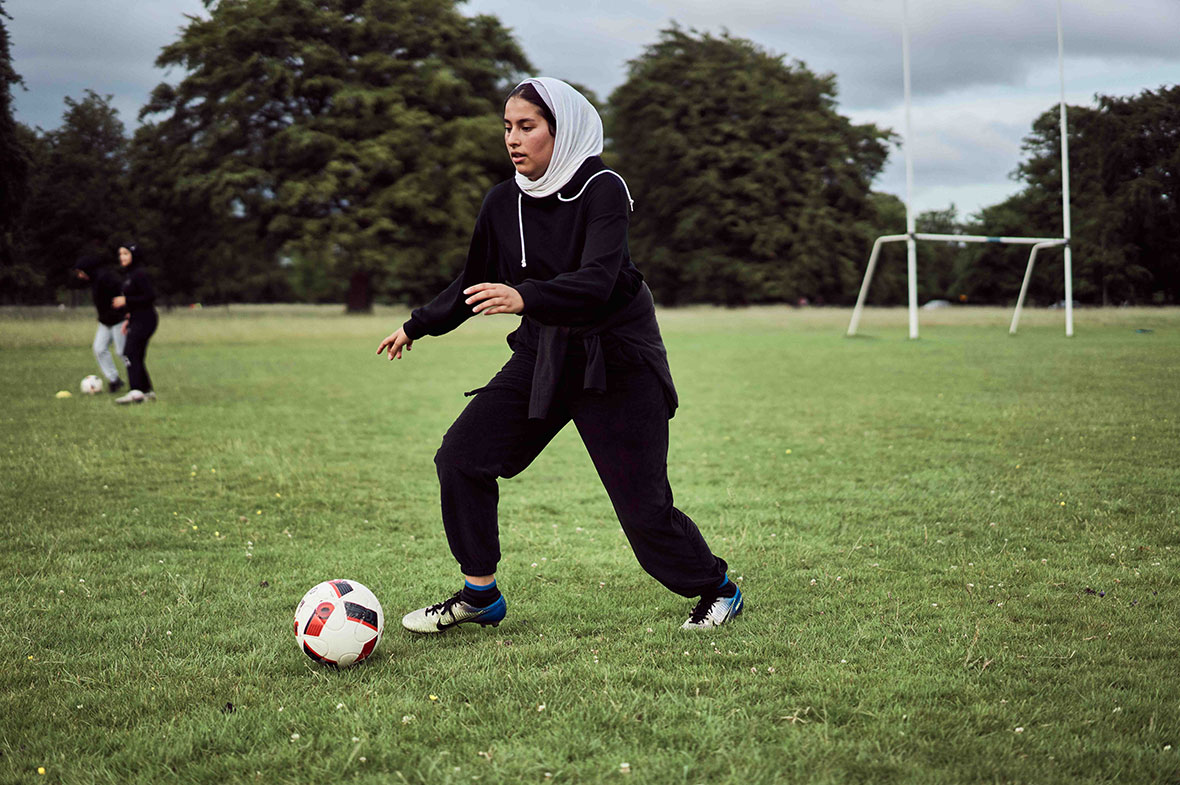 The impact caused a huge disruption in the lives of some of the 6,200 young people who engage with SARI’s services on a yearly basis.

None more so than the young Muslim women from its ‘Hijabs and Hat-Tricks’ programme.

The all-inclusive approach, extending to women of diverse religions and ethnicities helps young Muslim women and girls participate in sport and society as active citizens, while tackling the twin scourges of sexism and islamophobia. 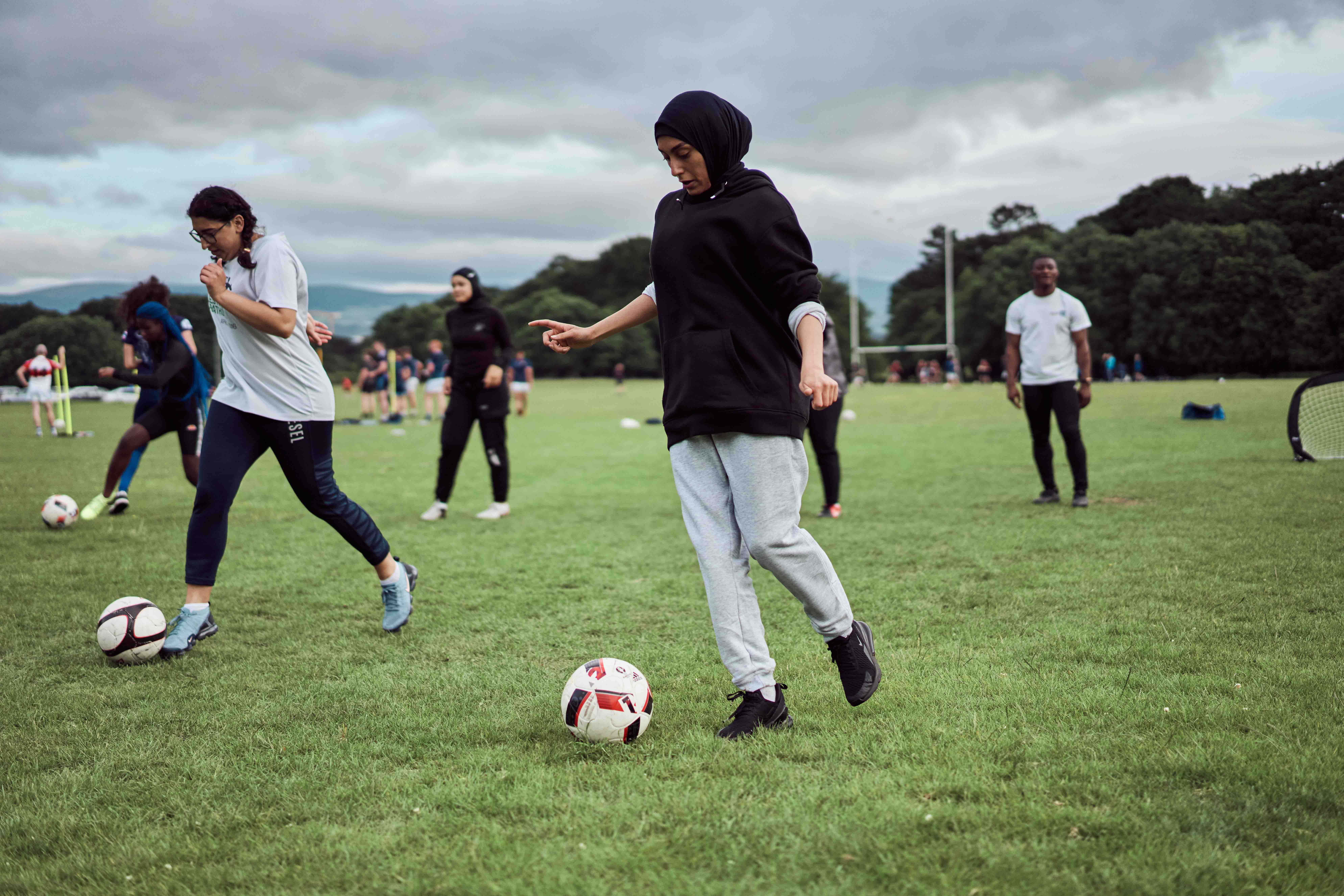 SARI was founded in 1997 as a direct response to the growth of racist attacks from a small but vocal section of people in Ireland.

“There's a problem in the Irish Republic with xenophobia — it’s a small island, small population,” said Ken McCue, International and Education Officer at SARI, during an interview with Europeana Sport.

“Xenophobia can lead on to racism so we wanted to interrupt that.”

In normal times, the organisation plays host to a multitude of soccer tournaments year-round in a bid to break down barriers and social stigmas surrounding different ethnicities and cultural backgrounds in Ireland. 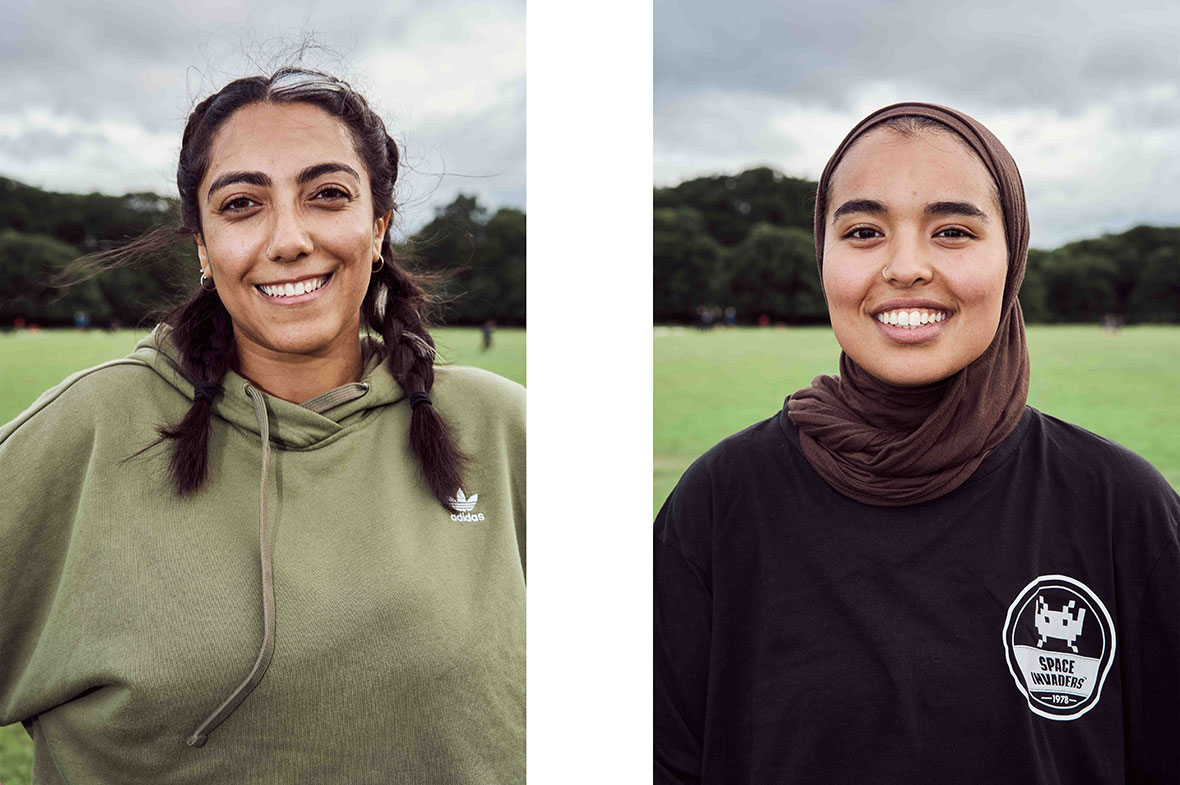 Across the Republic of Ireland, SARI’s workshops grow ever more important. Migrant advocacy groups warn that Irish children are becoming increasingly involved in racist incidents — with figures showing almost one in every five cases of racial abuse is perpetrated by under 18s.

Ten years ago, one of its own participants, 15-year-old Toyosi Shittabey, was murdered in a racist attack. In December of last year, Shittabey’s teammate George Nkencho was fatally shot in a case that rocked the nation and heightened ongoing racial tensions in Dublin. 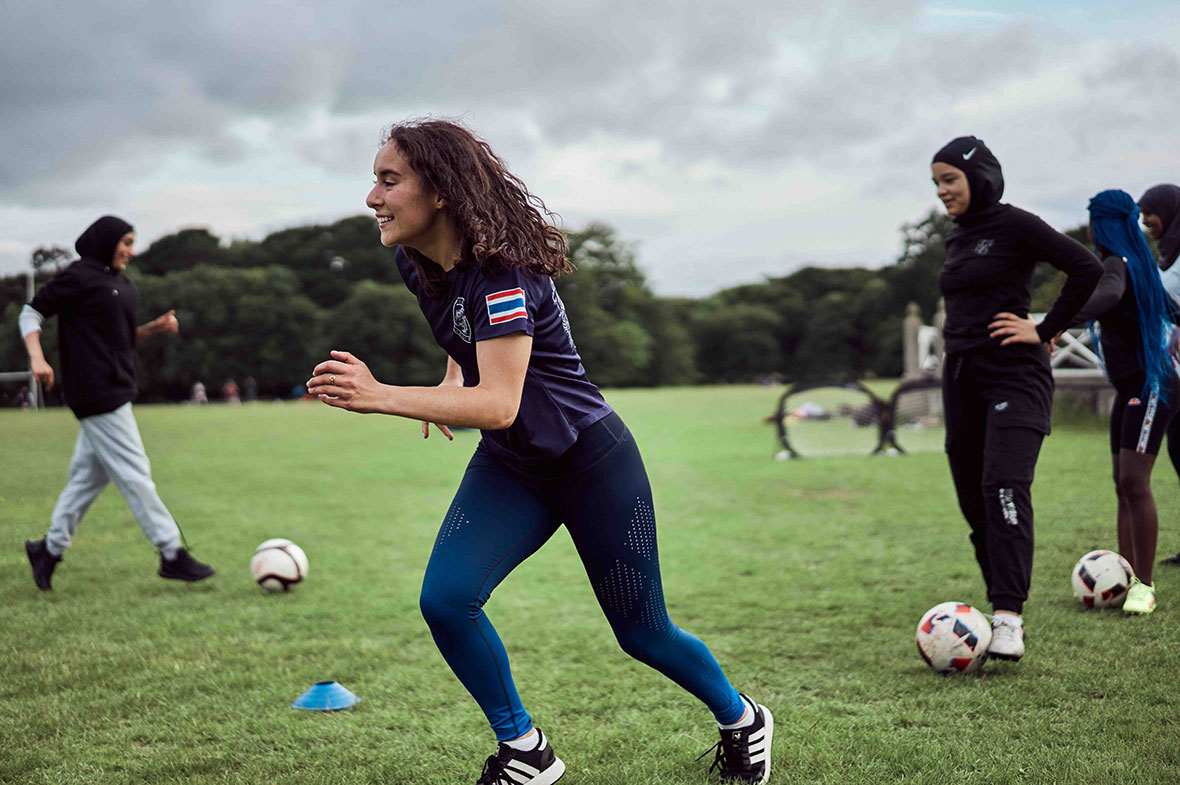 The team itself to which they both belonged, Insaka Football Club — Insaka meaning a ‘place to gather in Bemba, a language spoken in Zambia — was formed to give young black people a safe space to play for players who’d experience racist abuse from fans and opposing teams.

But it was more than a club, McCue told the Irish Times. It instilled a sense of discipline and pride in the players and gave them tools to fight back against the racism they faced in society — as a space of resistance.

If the lockdowns have been challenging for everyone, spare a thought for those young people at SARI who lost their only available outlet away from the classroom. And with it lost a safe space, with social isolation exacerbating existing traumas.

“If you are a black person here? There's no chance you're not going to face racism” 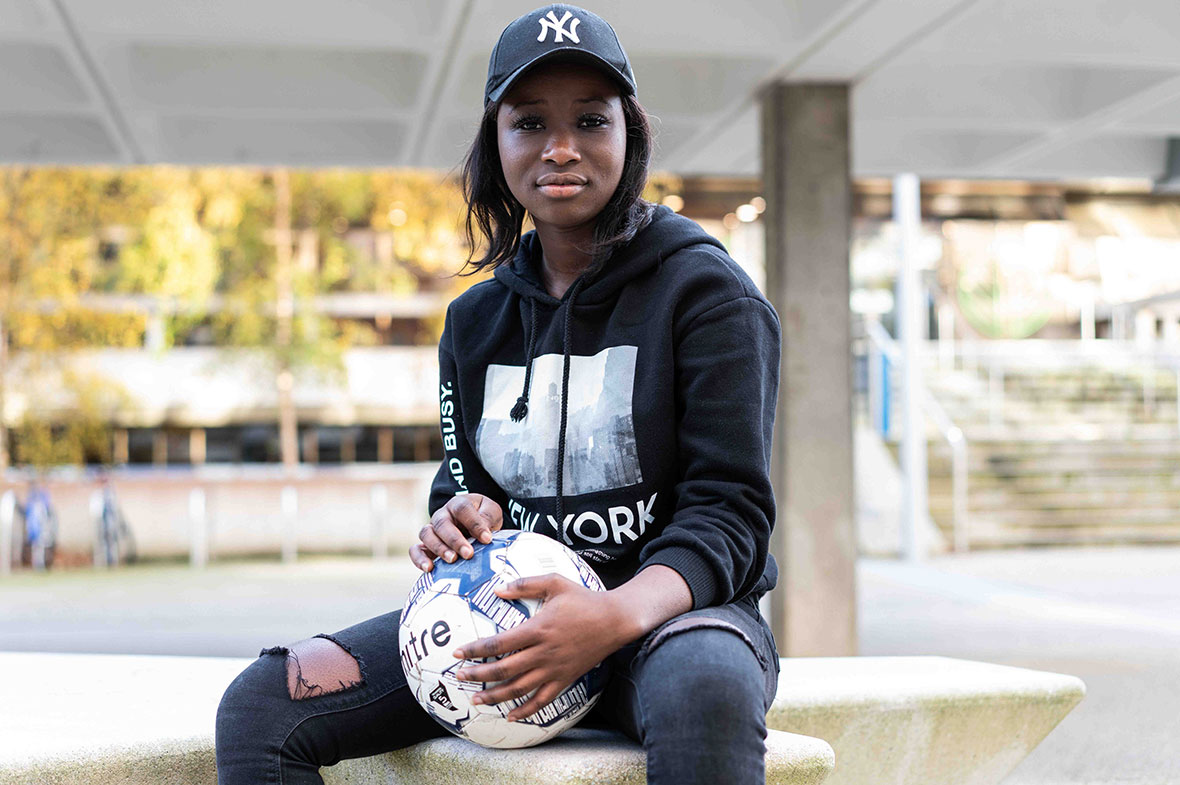 Mariama grew up in Sierra Leone, but due to personal circumstances, emigrated to Ireland aged 16 without her family.

“I did everything with my father back home,” she said.

“If he wasn’t home, I didn’t eat, I sat around and waited for him no matter what and then we would eat together.

This persisted until Mariama got sick and eventually hospitalised, but after her recovery and around a month to think over her situation, things slightly improved.

“I didn't do anything but my social workers said that ‘your dad is not here, so you just have to move on for now.’ They didn't say forever you have to move on, just for now to try to eat and try to do something,” she added. 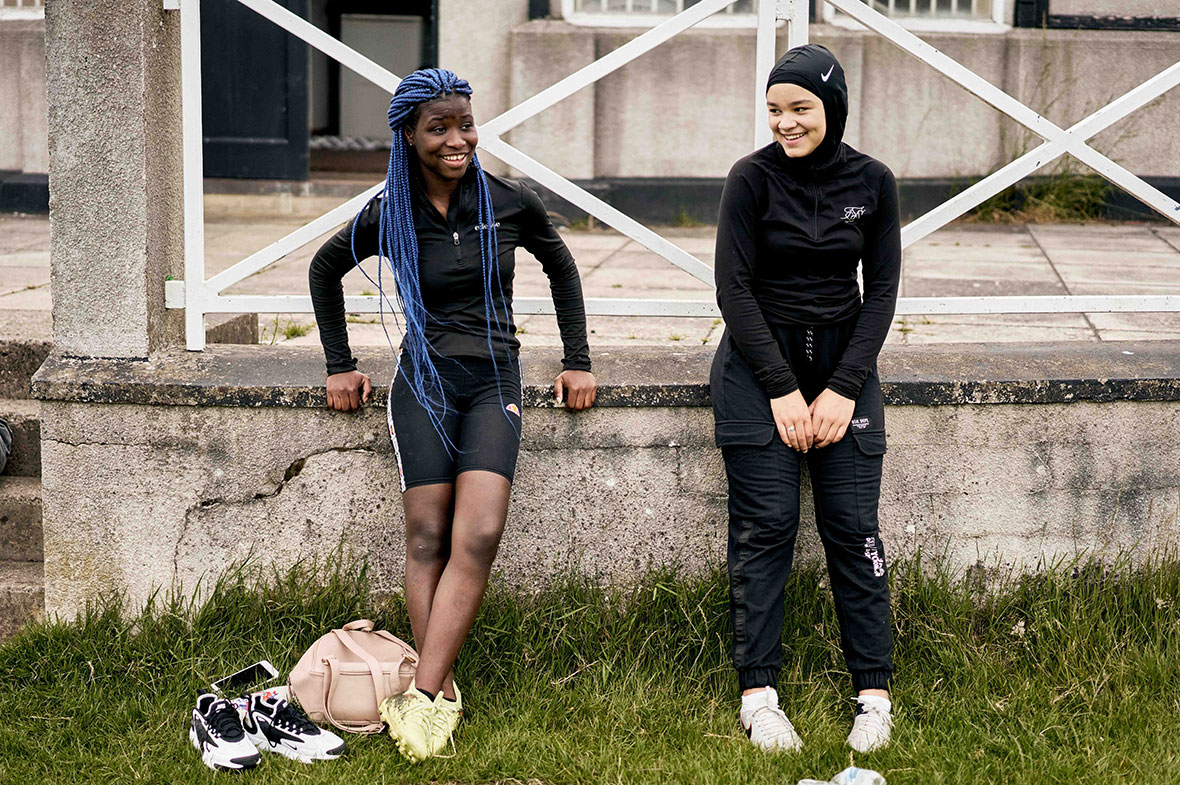 After discovering her love for football, Mariama’s social workers soon introduced her to SARI. From there Mariama’s life began to change.

“When you play football with SARI, it takes your mind off these things,” she said.

“What I’m going through, all my difficulties, all my pain, when I’m playing football I just forget about everything.

“After a long time I got to speak with my dad on the phone. It still hurts, but I am ok.” 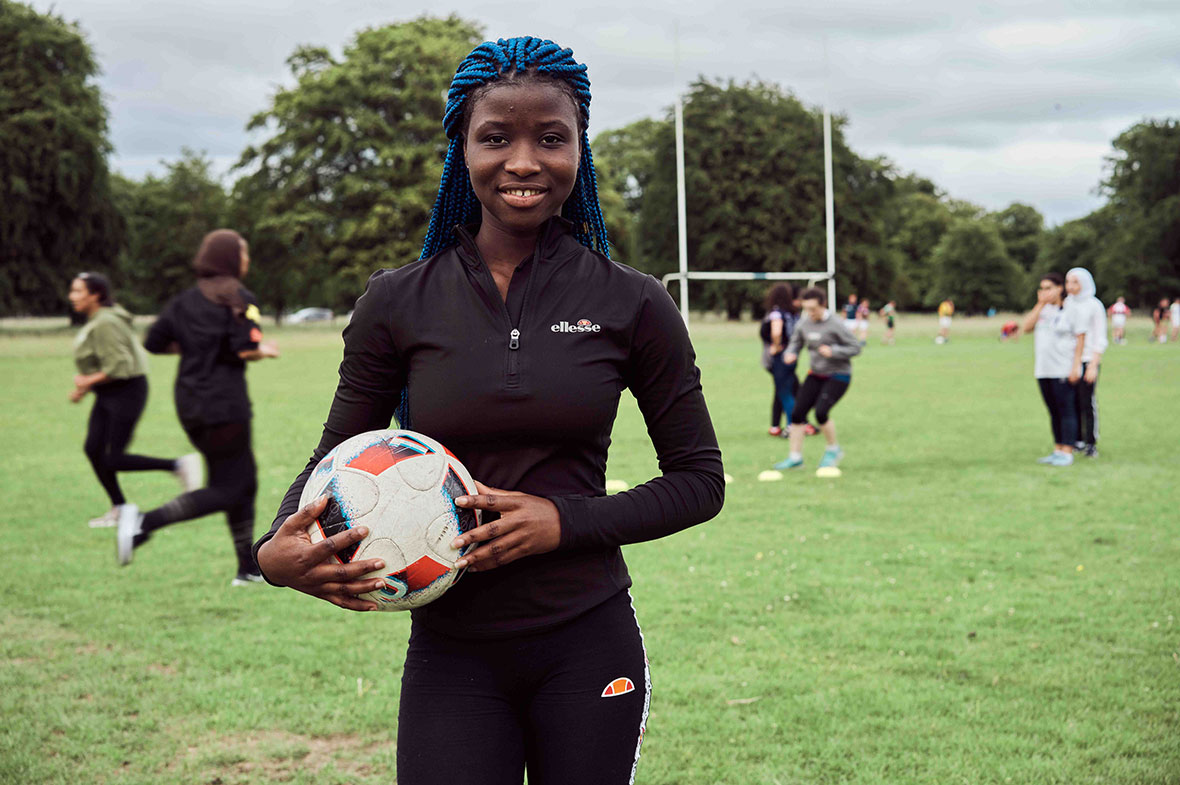 “If you are a black person here? I must say, there's no chance you're not going to face racism,” Mariama continued.

“I experienced it in school and stayed at home for a week. I was crying most of that time.

“The bus and public transport is the worst though. There is always someone staring at you. I will never get used to that, and I’m never going to like getting the bus.

“That’s why SARI has been so important to me, it has helped me to make friends, and given me confidence in my English. Before I was too scared to talk in case I messed up the words, now I’m confident and have made friends both at SARI and away from it.” 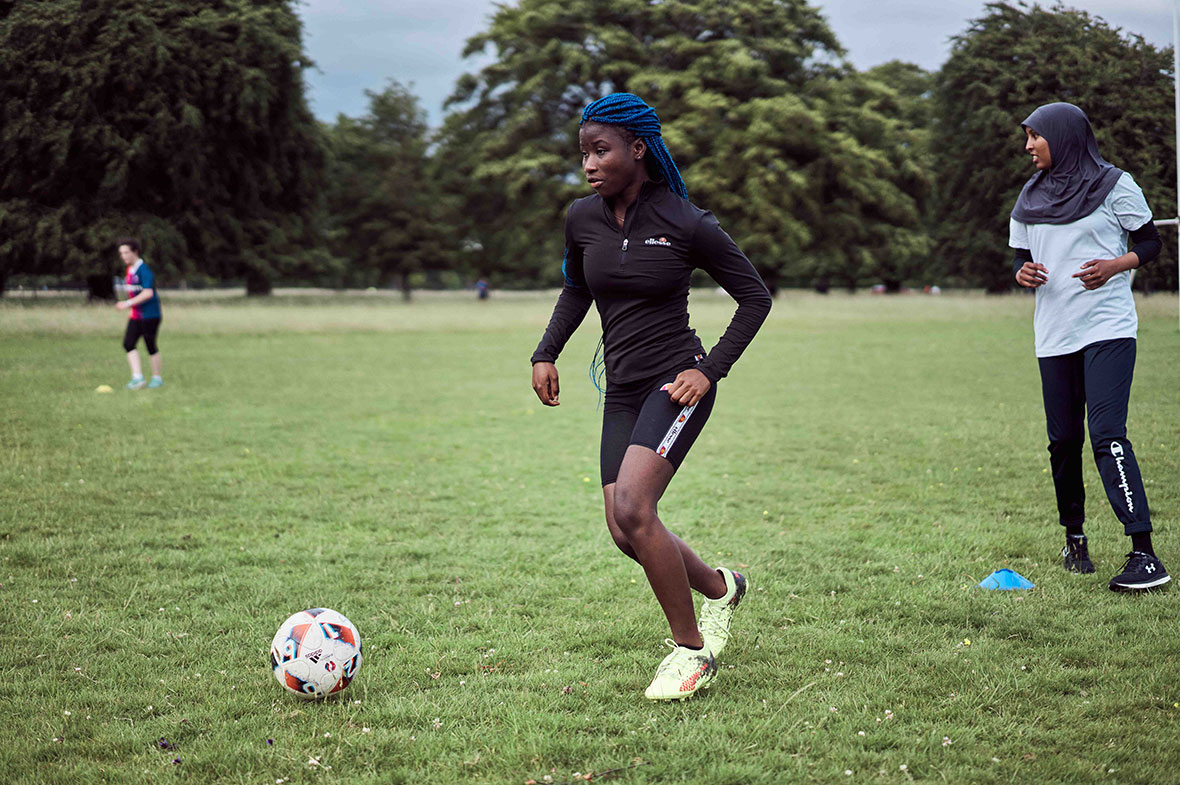 The past year has been extremely difficult for young people in Mariama’s situation.

The forced lockdown in Ireland meant being unable to hang out with friends, stuck at home and separated or hidden behind masks at school. 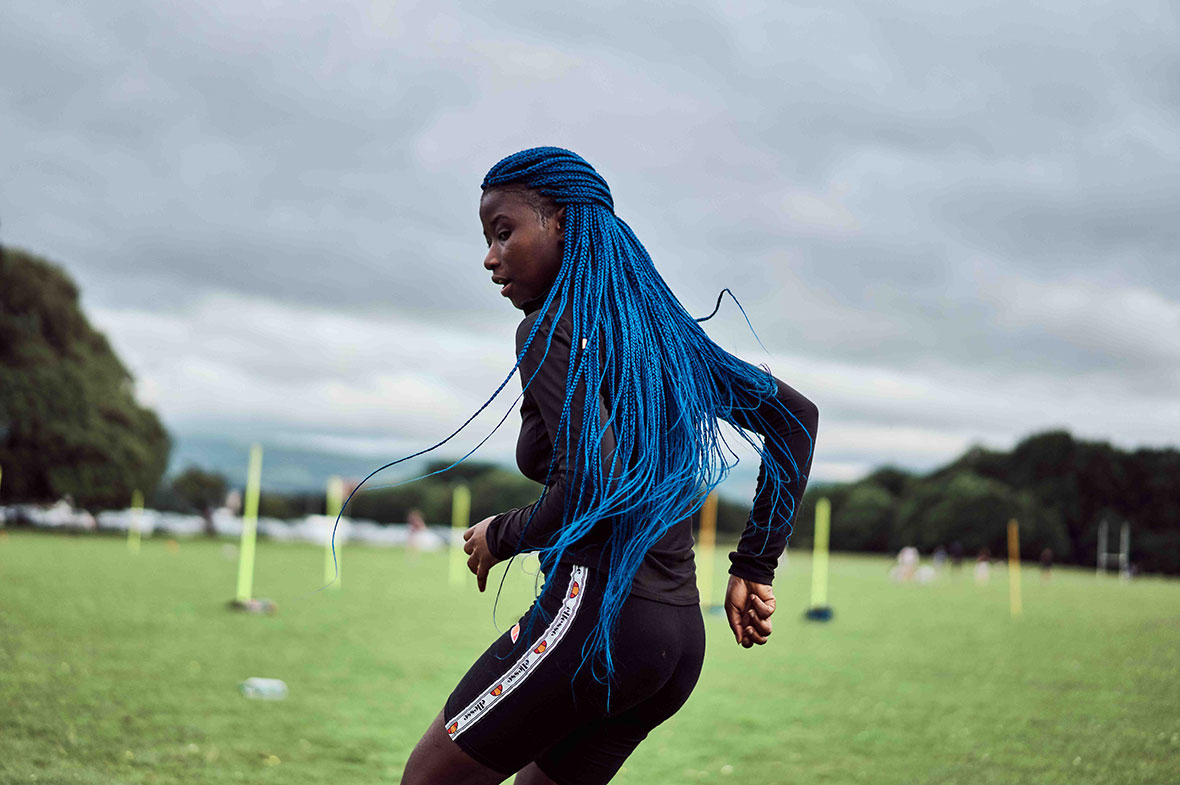 “It was more difficult, because I couldn’t go and play football,” she said.

“When I'm playing football, I lose everything that's in me that's hard for me or destroys me. Even when we just sit there together – you just feel relieved when you're there. 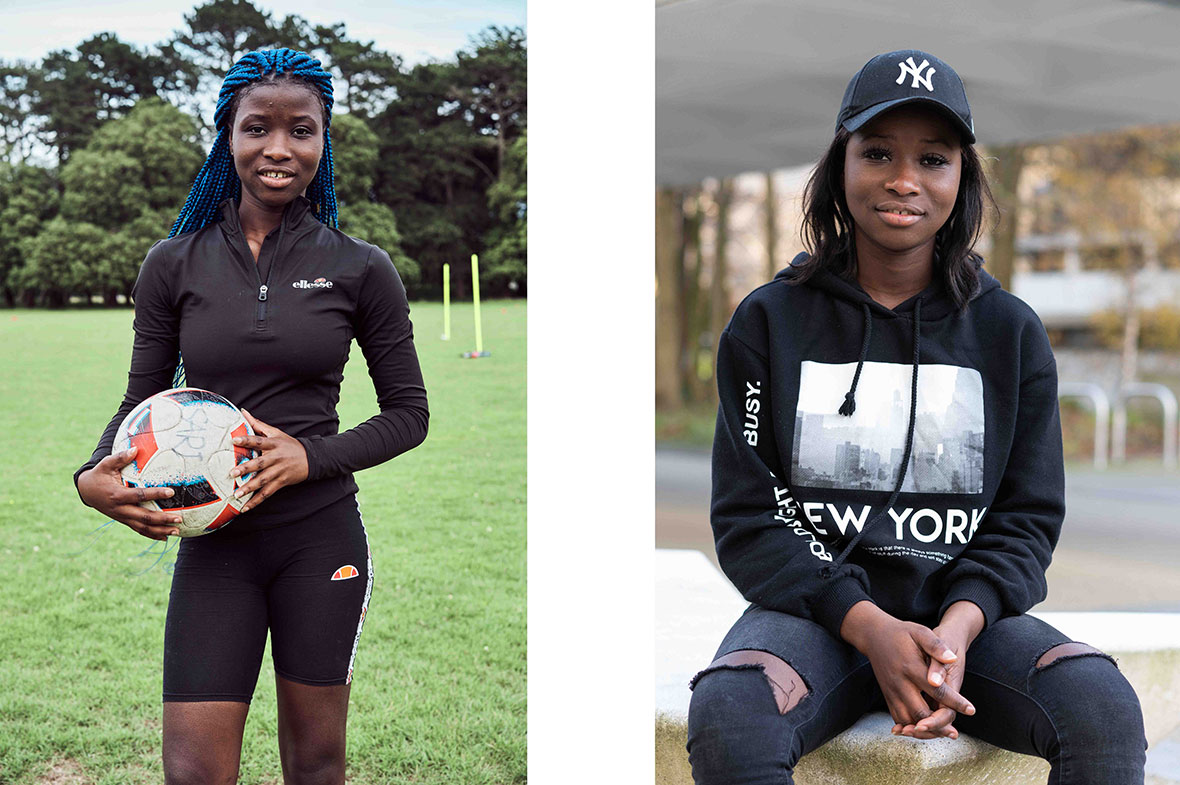 “But lockdown was very hard for me because I just had to suffer. I just had to go to school then come home and do nothing. That was my life. It was very difficult.”

“I learned that it’s ok to be different” 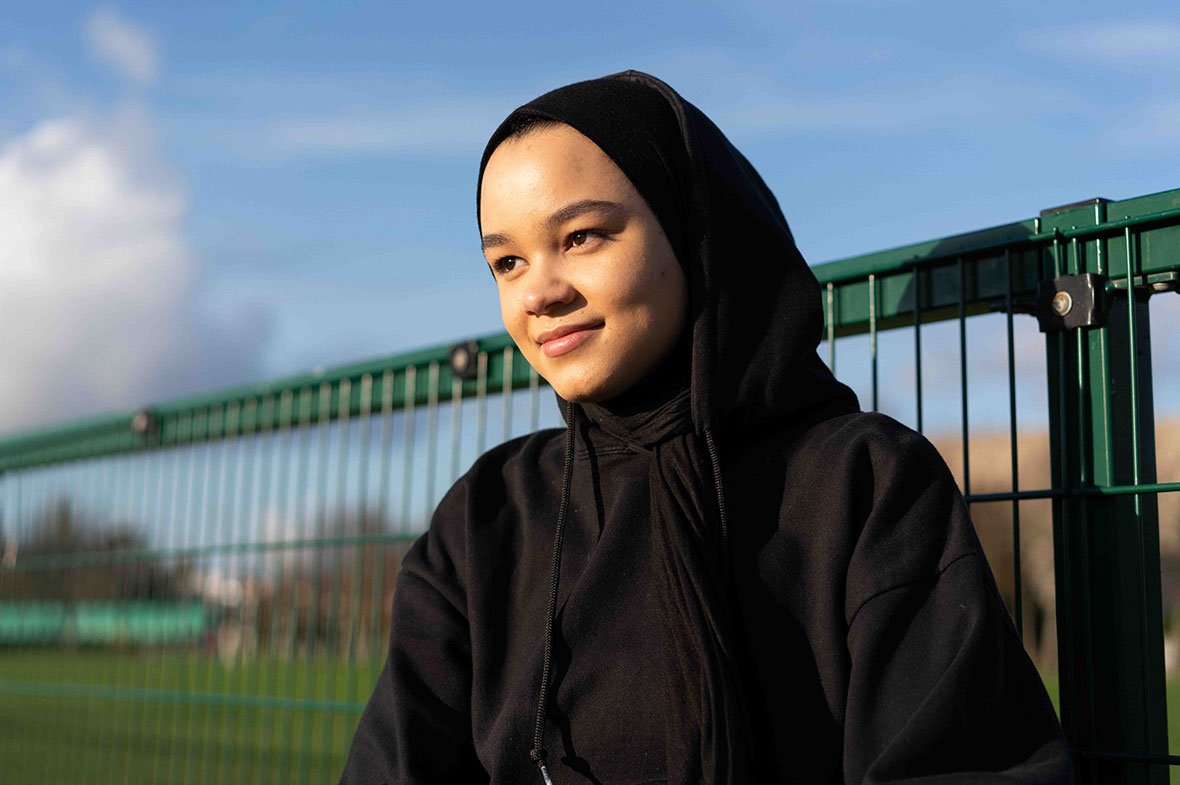 For Sara from Dundrum in Dublin’s south side, SARI was something of a family tradition — all three of her older brothers took part before she too signed up for a football team.

“When I was with my other football teams, I wanted to wear my Hijab, but I never felt comfortable,” she said.

“But the first day I went to SARI, no one batted an eyelid. It wasn’t even acknowledged to be honest, it was just a thing I wore, no big deal.

“I learned that It's OK to be different.

“Sari was a big part of my family’s life and seeing my three brothers constantly playing football it rubbed off on me.

“Being in an environment that helped not just myself but others feel comfortable in our own skins helped me develop as a footballer on the pitch and a person off of it.” 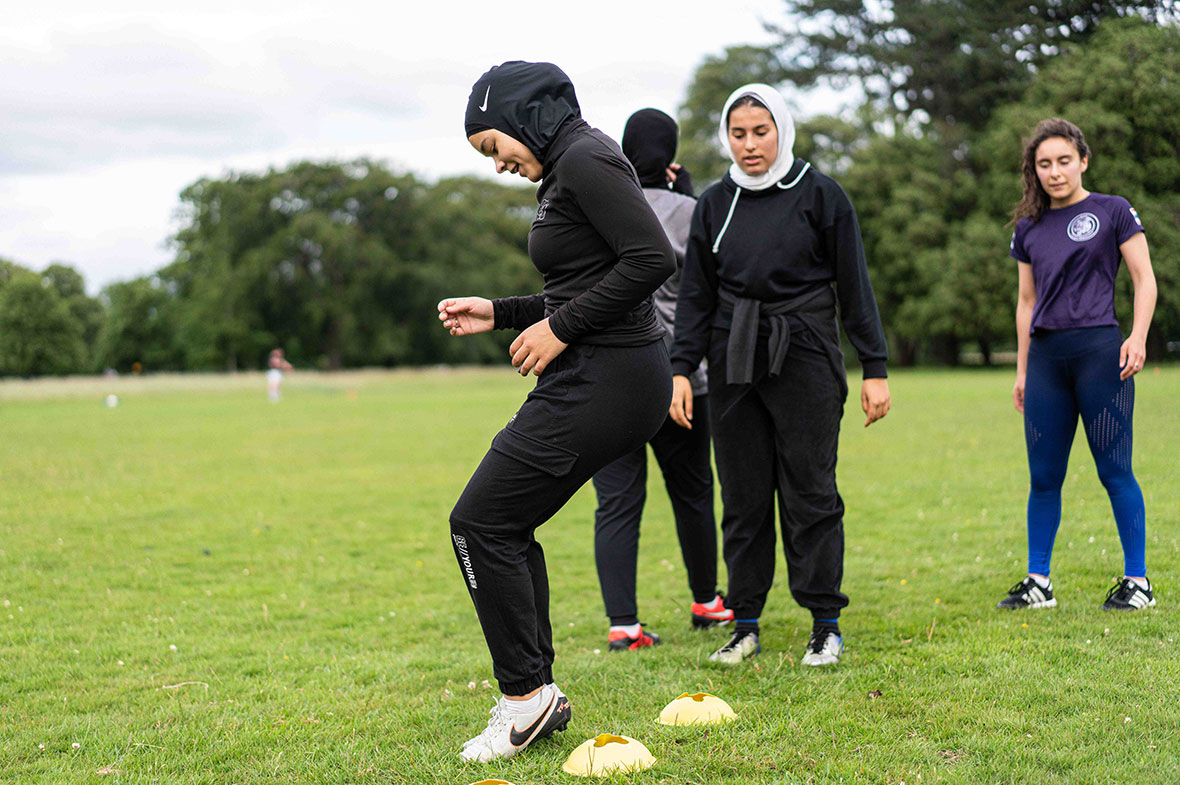 At SARI’s last Soccerfest in 2019 before the pandemic struck, there were a total of 54 nationalities present, helping to break down any stigma’s people had regarding other religion’s, nationalities, and genders.

“These tournaments are so good, like the workshops you do within them, where you’re helping out and there is talks given, they’re super helpful and you have so much support around you, not just from your own community but from people all around Ireland.” 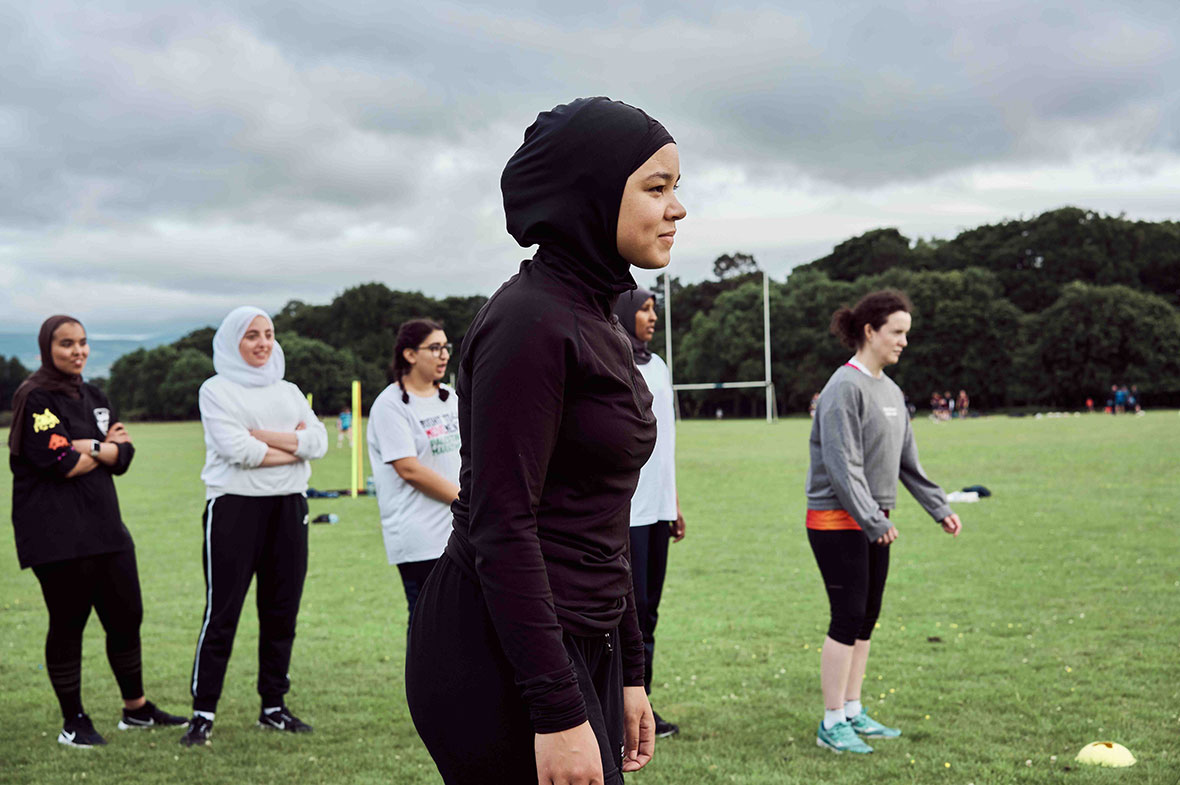 Sara graduated to college last year, but due to Covid-19, was unable to attend physical classes, with lectures being moved online for the 2020-2021 academic year, and Soccerfest postponed for the year. 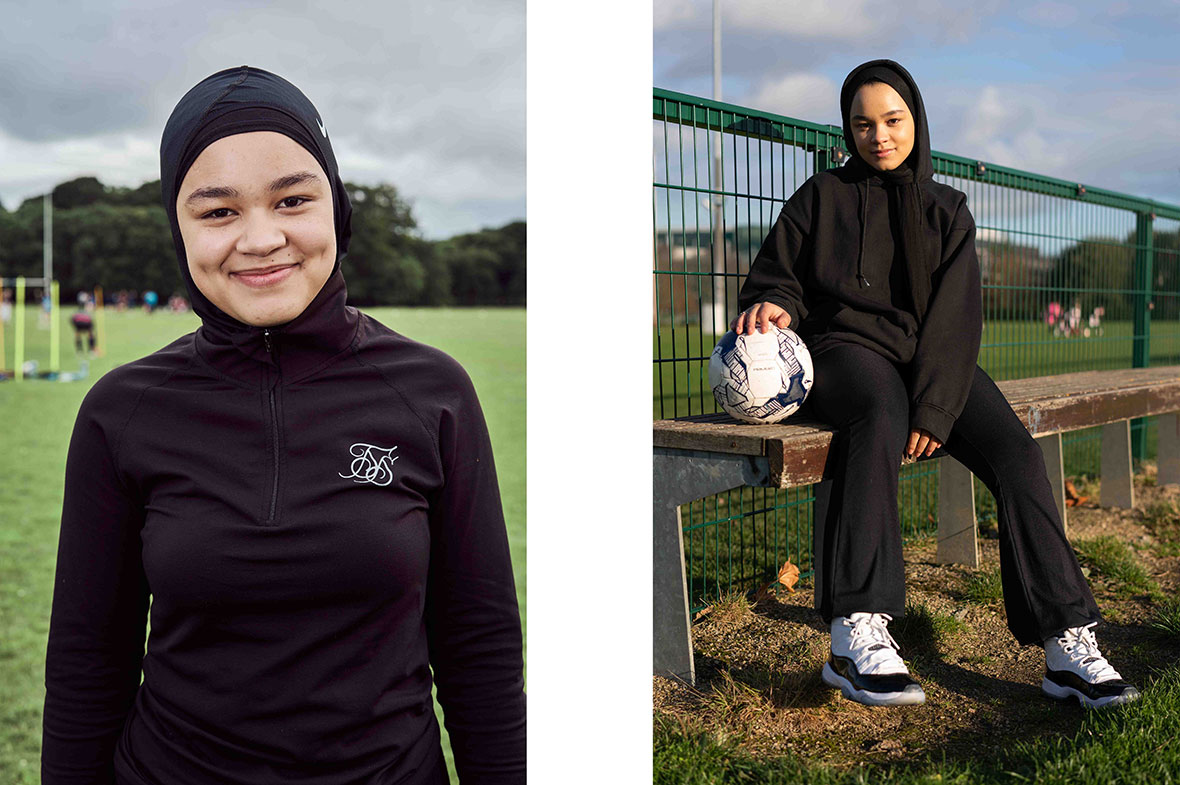 “I don’t want to complain with what some other people have had to deal with, but I suppose it has been hard to do all the lessons virtually. Not just for me, but for a whole generation of students around the world.”

“To be denied such an amazing time in our lives, it’s quite sad actually.”

“It can be the little things, like being followed around every shop you enter” 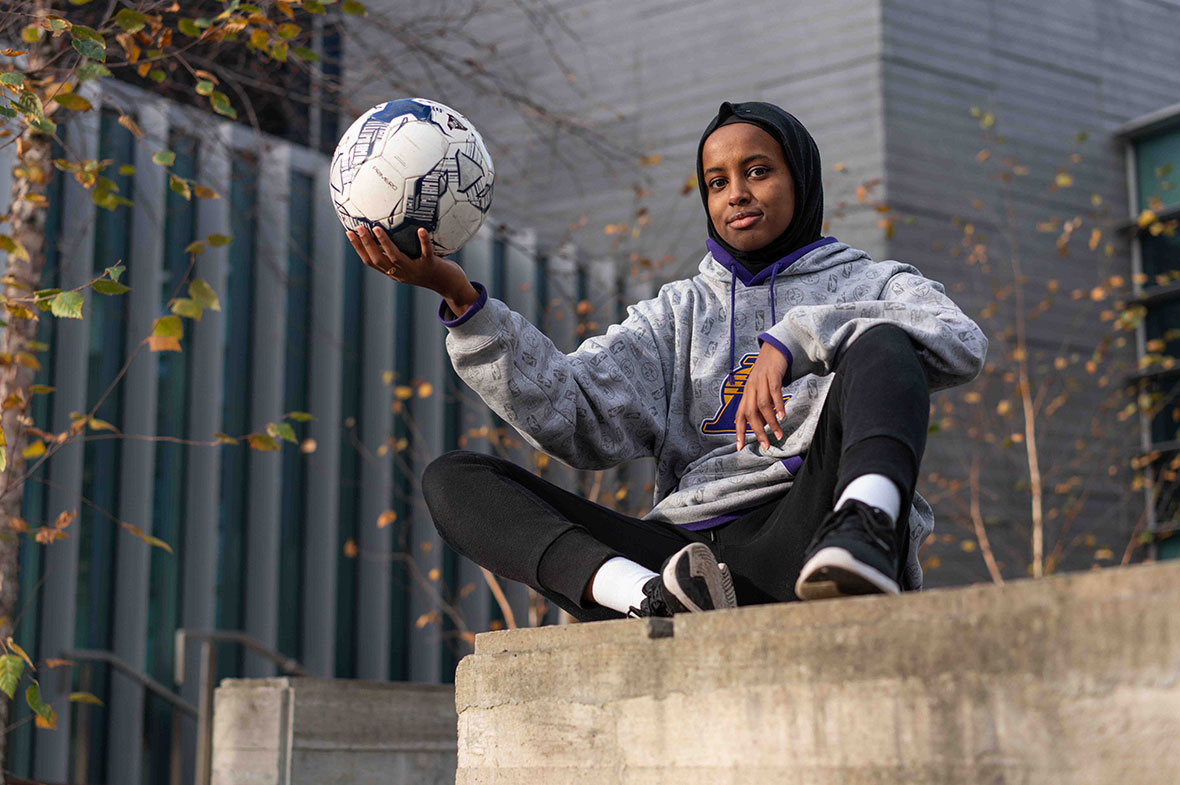 Suad Mooge is a college student who specialises in the scientific field. She credits SARI with giving her the confidence to be daring and to recognise that she deserves to take opportunities the same way anyone else would.

“SARI has taught me to just go for it, in all instances no matter what. It has taught me how to be a team player, a key player and uplift players,” she said.

Like Mariama, Suad feels there is an undercurrent of racism prevalent in Ireland, and says she feels it on a daily basis. 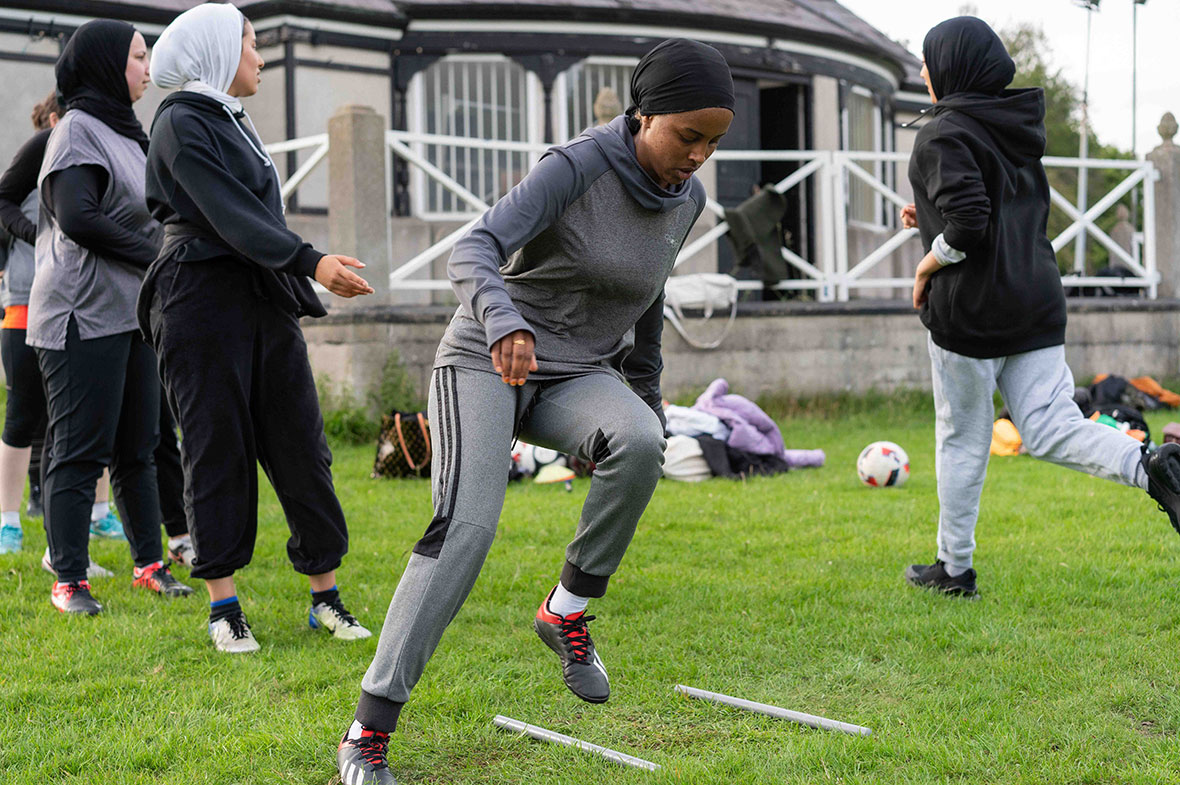 “Although I try to overlook the challenges I face, there have been times where their existence is so overwhelming that it would be impossible to ignore them,” she said.

“What I've learnt from being in education is the extra effort needed to be on the same playing field as others.

“There is something about being your work being scrutinized and micro analysed for any possibility of fault that makes you put the extra work in.

“On a daily basis it's the little things like being followed around every shop you enter by the security guard. Every single time.

“Some might argue it's their job and it's possible my choice of clothing might've alarmed them. However, when you walk into a store just as the locals do and are wearing the clothes they do you soon notice one difference. In my case, it’s the colour of my skin and the hijab I wear on my head.” 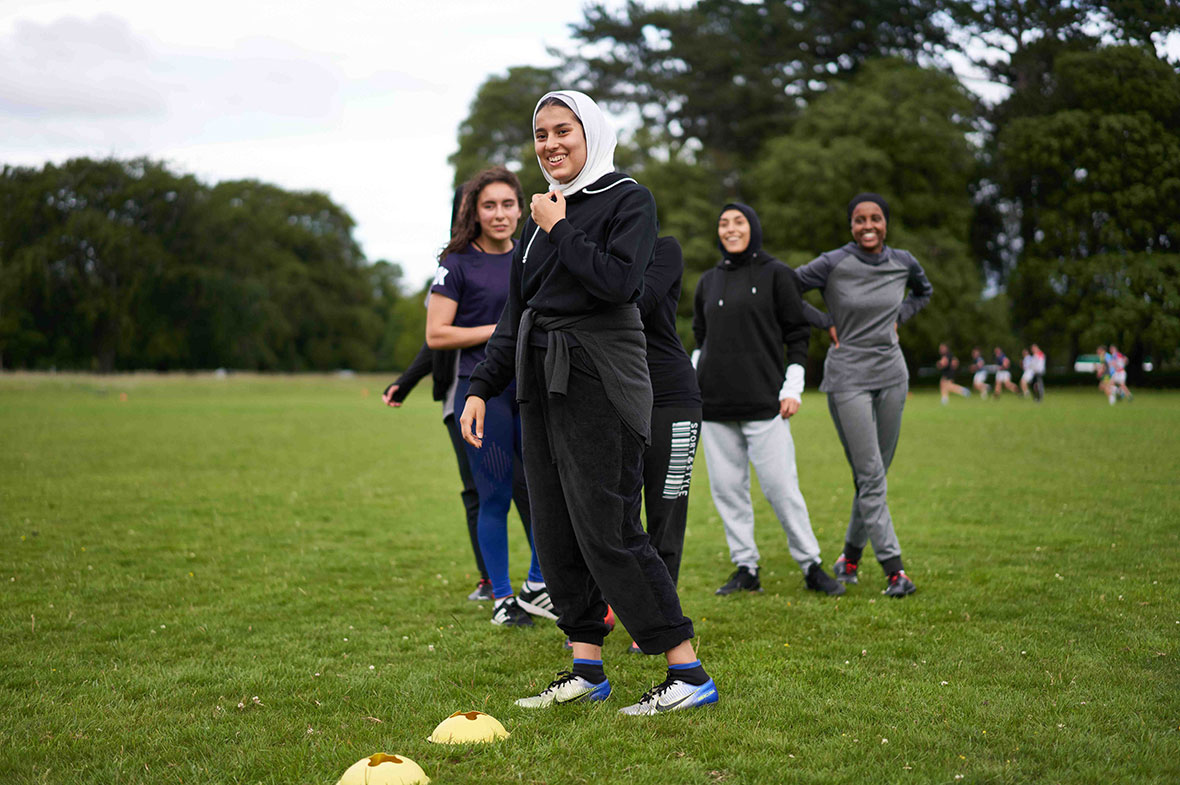 The purpose of SARI — to give young people their own safe space to gather and work on their football skills — has helped Suad shape her sense of self.

She feels the organisation has been crucial in her social development. It’s something to think about in the fallout from the pandemic and the events that unravelled following the UEFA European Football Championships.

In the game’s absence or when it as a safe haven is punctured by hate, it’s not only the individual who loses out but the surrounding community too.

“Football has highlighted the importance of how you conduct yourself on the field. It has given me a drive to work harder and commit to training and games with the right attitude in the hopes of setting an example for my team mates,” said Suad. 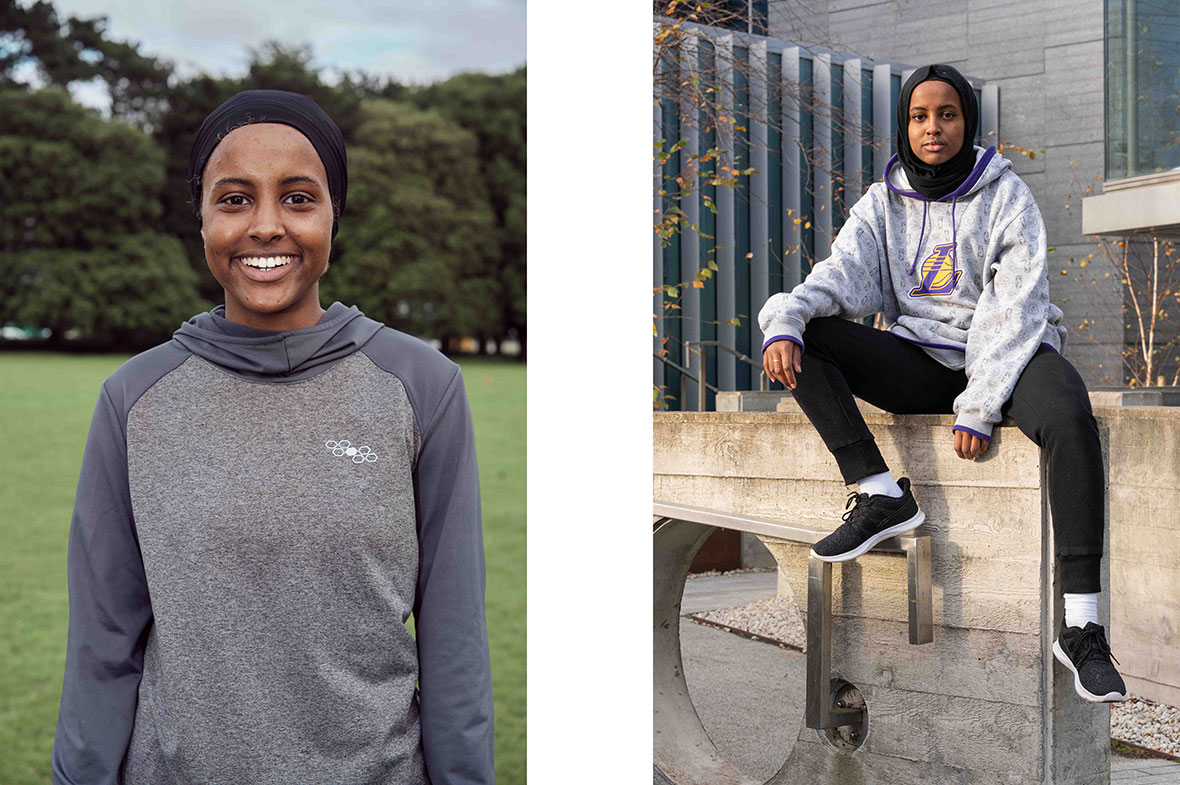 “It has improved my leadership skills. Training always gives me a new found passion and love for the sport at every session. If people are unaware of any drills, I'll put myself forward to go first so others can get a better understanding.

“I now volunteer as a mentor in my college to take on incoming college students and settle them into college. I stay in contact with my students and help them with any issues and questions they may have about college life.

“I am closely involved with charities and my confidence levels allow me to always fundraise for many important causes around the world in Dublin.

I now leap at opportunities of public speaking: I partake in weekly debates when I can and take part in college debating competitions.

Mark Henderson is a photographer and filmmaker working within the worlds of art and design, publishing, fashion and advertising.