Hey everyone, Sofie Junge Pedersen here! Over the summer holidays, I wanted to spend some time visiting a football for good organisation. Which is how I ended up spending the week with Chiparamba Breakthrough Sports Academy (CBSA) based in Lusaka, Zambia. The NGO tackles a lot of issues including AIDS prevention, support for young people through football, and education about female sexual and reproductive rights — something many girls here are completely unaware they have. I chose to support CBSA because they approach youth development with a holistic view. They’ve come a long way and even founded the Zambia Street Football Network (ZSFN) in 2006 to develop a network for collaboration among similar organisations. It’s honestly such a privilege to finally meet face-to-face the communities that Common Goal teams up with! 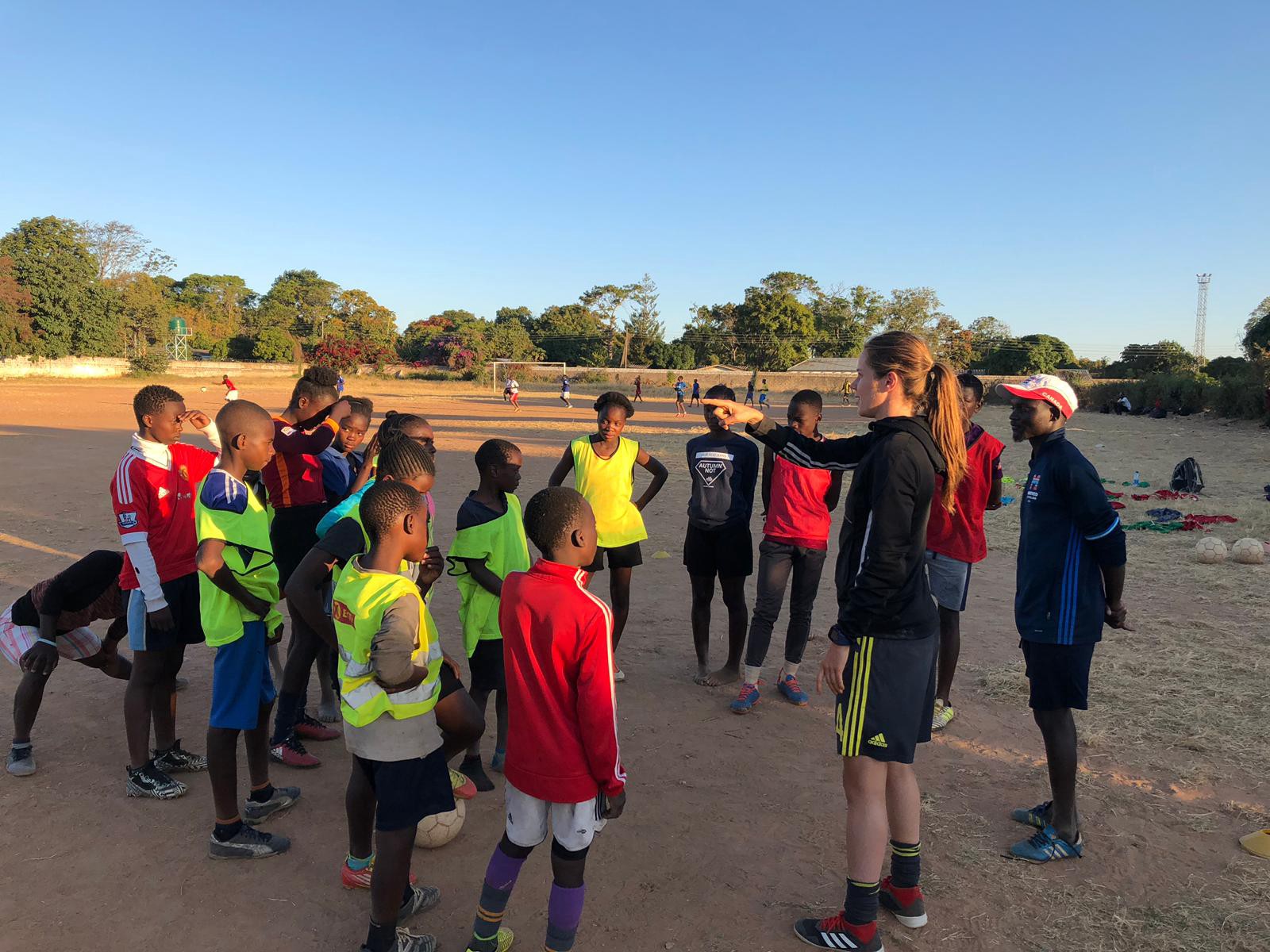 After over 12 hours of travelling and one layover, I finally reached Lusaka, Zambia! I’ll skip over the standard airport security stories and cut right to the chase about my visit to the Chiparamba Breakthrough Sports Academy. Today, I watched as the kids played happily in my favourite sport. It was honestly such a treat to see the effort and sweat they put into the game, they ran and tackled hard.

The team at Chiparamba gave me a lovely tour of the community and the CBSA office. As we walked through the daily lives of Chiparamba kids, meeting their families, I was able to see first-hand how football impacted so many children’s lives. Even in small ways, like having something to look forward to. But that’s far from the only benefit of the game. CBSA has made football both a fun and effective activity for kids to enjoy and mentors to educate, catalyzing the sport as a tool to help kids learn about teamwork. The game is also used as a tool to live sustainably and learn more about leading healthy lives from mentors and each other. 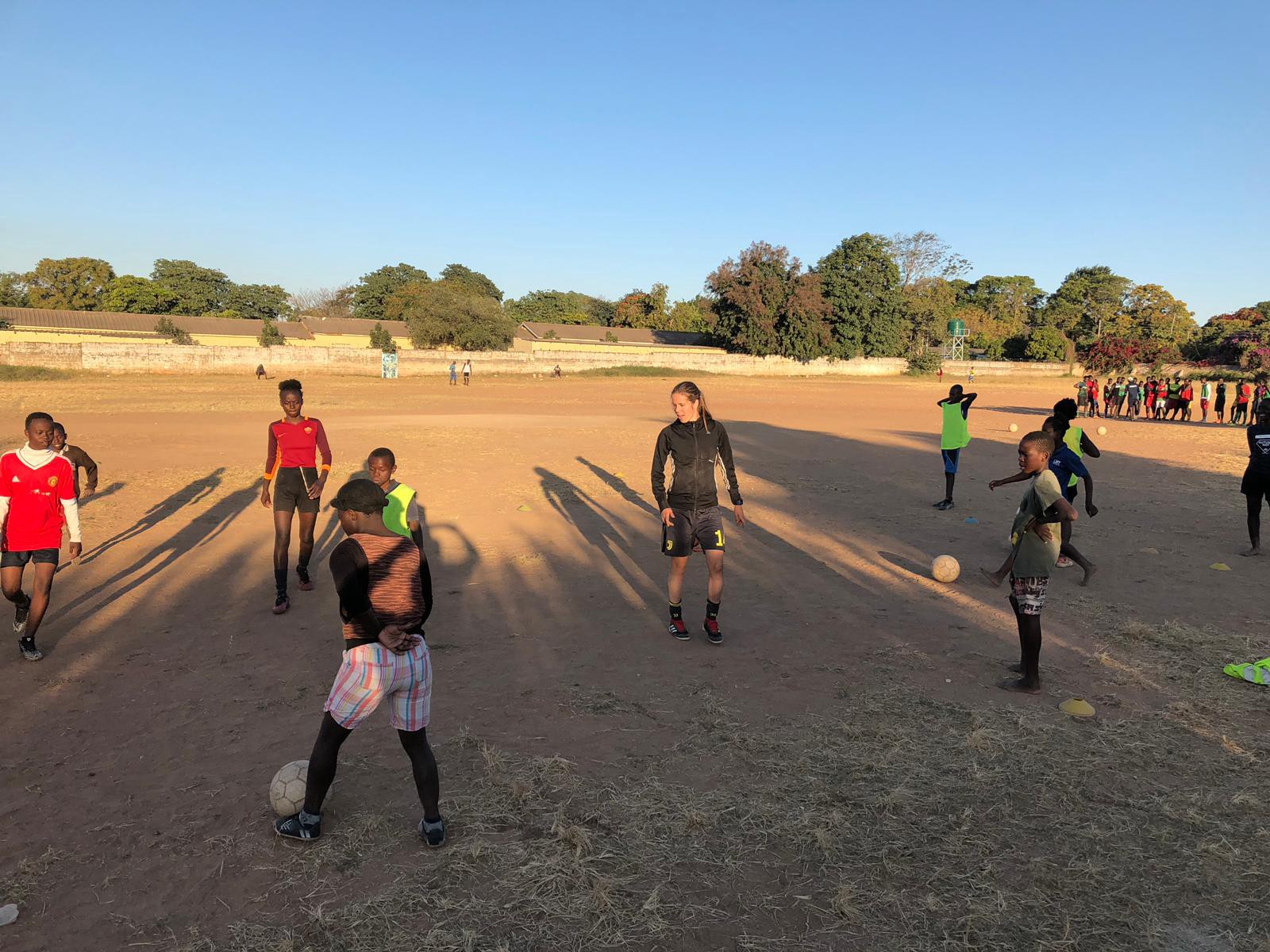 I finally got to cleat up and take part in a proper game! We played a few matches with the boys and girls (I was definitely no match for them). The kids were tough though. They tackled hard, ran fast, and laughed a lot! Though they ran fast, I had to make sure they weren’t running aimlessly — that’s when I decided to step out and coach instead.

Later in the day, we had children and adolescents join in for a huge tournament-festival-like event, organizing mini pitches to play football. I would say there were at least 200 kids altogether, scoring goals and making plays. What touched my heart the most was watching how the girls were playing so carefree, both with each other and with the boys. The kids took the game seriously, they were patient, worked hard, and were extremely focused. Some of them would even engage in their own rituals for good luck before playing.

I may play football for a living, but it almost felt like the mirror was flipped back at me: I got to see how young people were living to play football. Watching them play worry-free on the pitch was just as satisfying as any game I’ve taken part in.

I took a pleasant tour around the town today, seeing Lusaka for the hidden gem it is. Even got a mini history lesson about Zambia’s capital! “Lusaka” is apparently named after an old village chief, Chief Lusaka in the early 1900s. Since then, the city has really grown — it was a lot busier than I expected (but that would make sense with a population of 1.7 million) and there are so many lively things happening in the city. Lusaka is also home to the country’s largest university, the University of Zambia, as well as the Lusaka National Museum. It’s so fascinating to see how much the place has grown over the past two centuries and what kind of home this will be to the young kids of Chiparamba one day. 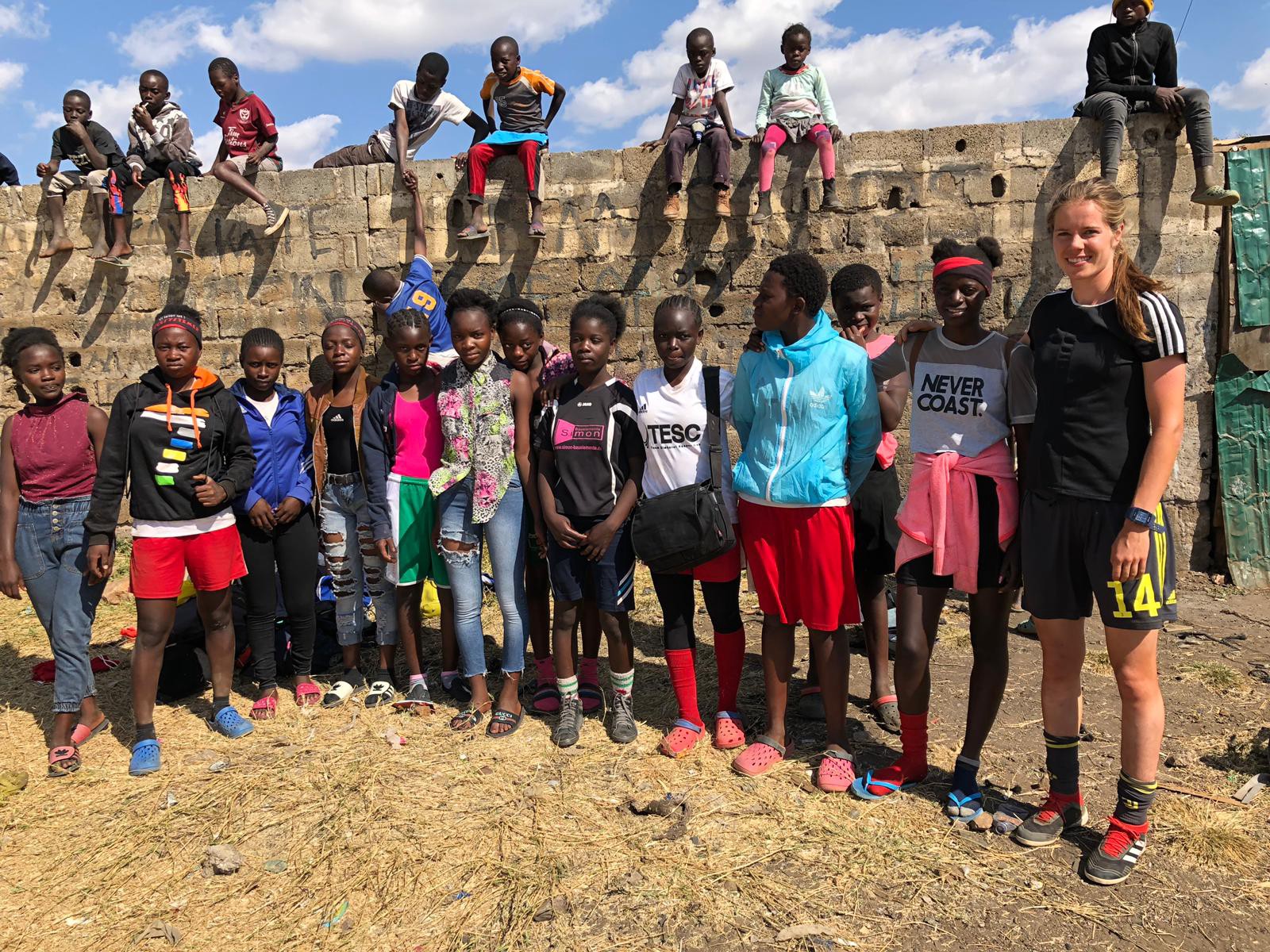 Exciting developments today! I coached training with the girls in the afternoon, and I absolutely loved the initiative these young ladies played with. Of course, we invited some young boys to join us as well. Before training, in the morning, I had a long discussion with some of the young coaches in the organisation. We mostly talked about the different challenges for coaches: for instance, the different drills to keep training fresh. But also the importance of being a “good coach,” meaning how to be good role models and show our impressionable youth the respect they deserve to pay it forward.

It wasn’t how the kids played or the coaches mentored that blew me away though. It was the sheer dedication to make a change in their community that left me speechless. After spending time with the coaches at the organisation, they educated me on some of the problems affecting the community in Lukasa. Young people struggle with drugs, alcohol, crime, early marriage, early pregnancy — that’s their unfortunate reality. That’s why the work that this organisation does is so important, it helps young people develop tools that can help them avoid those problems.

The experience allowed me to reflect a lot on what football means to me: Having that whistle around my neck made me think from my own experiences, what it means to be a good coach, and how far you can go when you have a good coach. For instance, at Chiparamba, the young coaches didn’t see their work as a chore, but as a part of themselves — undeniably dedicated. They led the festival’s activities on Sunday and maximized all of their available resources to make it a success; using charcoal to outline a pitch and refereeing the matches (it’s not an easy job!) simultaneously keeping up with everything going on with 200 young footballers running around.

I would say, they were a true definition of a good coach. And that’s all that I could wish for the kids at Chiparamba, to have good coaches and grow up to be good coaches — on and off the pitch. 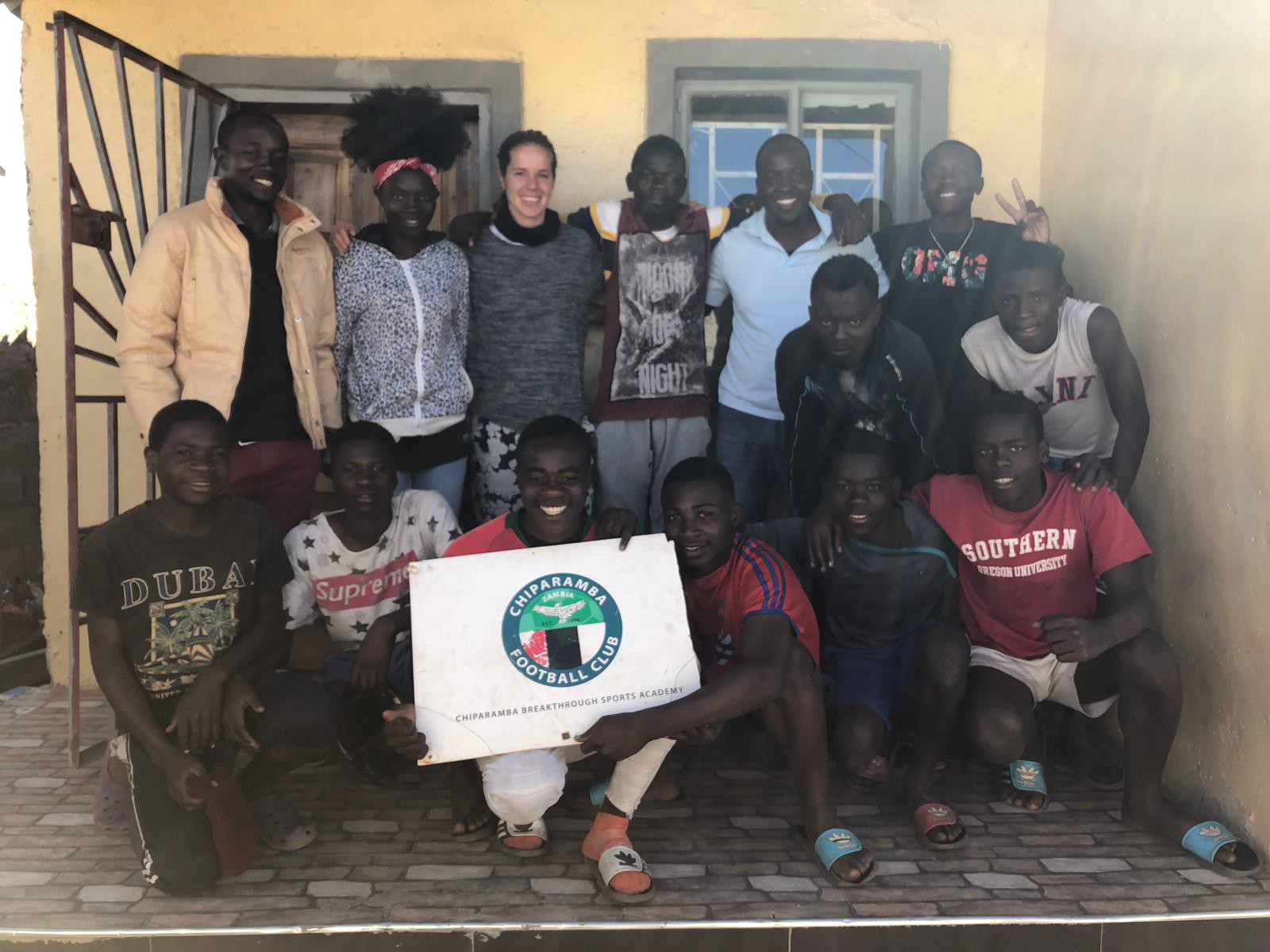 Visiting Chiparamba in Lusaka was honestly such a privilege and it’s always fascinating to learn more about how these football for good organisations empower their communities in their own narratives. For example, I want to highlight the diverse programs that Chiparamba hosts. They’ve structured these programs to balance both education on gender equality & healthy living to complement their time on the pitch. I saw how three young women from Chiparamba were invited to speak at one of the local schools to facilitate a conversation about gender equality in an extremely accessible way — gauging what young people knew about gender, their misconceptions, and what kind of “work” men and women are meant to do, ultimately breaking down these misconceptions and maintaining an open dialogue with young, impressionable minds. This is just one of the examples of how the organisation is facilitating change in their community, speaking to the volume of what “football for good” truly entails.

Sofie’s trip was organized by the third half. If you want to find out how you can visit Chiparamba in Zambia or other organisations supported by Common Goal members, visit www.thirdhalfsoccer.com”