Empowering young people in the midst of conflict

From a conversation between friends about how sports could be used beyond athletic performance to change lives, to the creation of an organisation that is running sports for development programmes across the West Bank, East Jerusalem and into Gaza now reaching over 3,000 young people each year.

Since its establishment in 2010, Palestine Sports for Life has been using football and other sports to enable young people from communities across Palestine to tackle the challenges they face on a daily basis living in the midst of conflict.

In an environment stricken with political violence, and in a community where football is considered a ‘man’s sport’, Palestine Sports for Life co-founder Tamara Awartani has been fighting against the odds for more than a decade.

Political turmoil is the norm on the home turf of the football for good organisation and it is that instability and violence that leads to unequal opportunities and financial insecurity that disproportionately affect women and young people.

Girls and women are often confined to the household and have few opportunities to engage in activities in public spaces – that includes playing sports and, particularly, football. 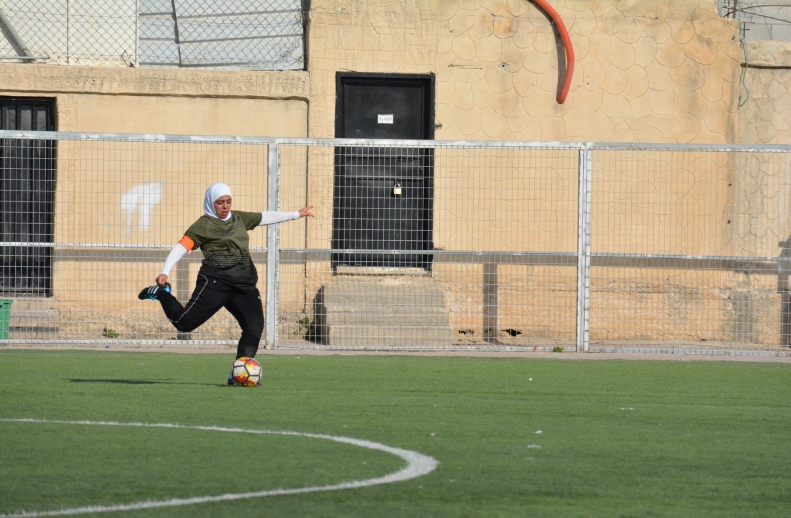 Growing up in an athletic family, Awartani was fortunate to try a diverse range of sports from competitive swimming and basketball to horse riding. But never football.

“I am into football, but it was always more watching the World Cup. There wasn’t any opportunity at my time to play football,” she explains.

Even when she studied Physical Education on a scholarship from the Palestinian Ministry of Education at the University of Jordan in 2000 she realised, with consternation, that football had been removed from her first semester programme because she was a woman. It was only in 2009 that she finally managed to include football in her academic portfolio when she completed a FIFA/CIES Executive Programme in Sports Management Diploma in Palestine.

Beyond the lecture hall, she discovered the transformational power of football and other sports through her passion for a different discipline: basketball.

“Things really opened up for me through basketball and my personality became stronger by the year,” she says.

“I was put in different positions to make a decision or plan something, to speak up and communicate with my teammates. These are things that you don’t learn off the court, that support you in the day-to-day.

“I wouldn’t have gone up and spoken up in front of so many people on different occasions and conferences if it wasn’t for basketball. Basketball also built my network and enabled me to go to different countries, experience different cultures…Without it, I wouldn’t have learned all that I did.”

Through these experiences, Awartani became more aware of the disparity between what she experienced elsewhere and what she encountered when she returned home.

“When I came back and was coaching a team of young boys, I went into the street and I saw that the kids there didn’t get the same opportunities as the ones I coached at the club. ‘Ok,’ I thought, ‘we need something for the whole community and not just the elite kids.’” 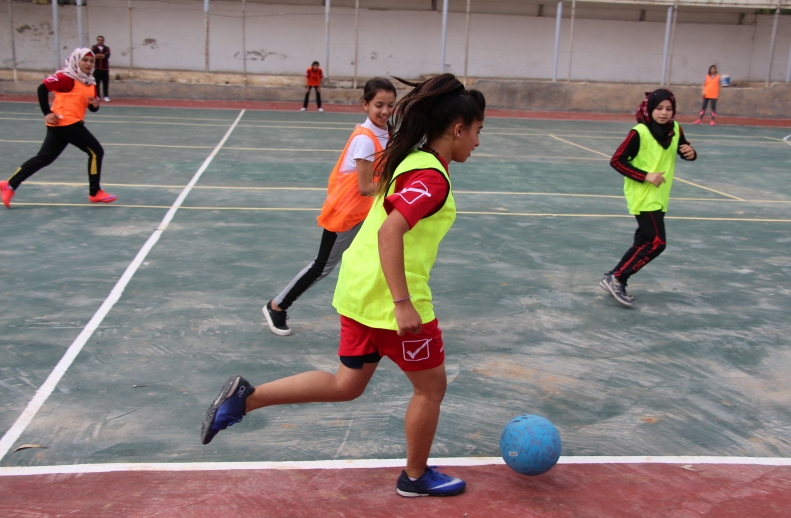 An idea started forming in her mind and, during a gathering with some friends, the group started exploring the possibility of combining her FIFA training, network, background in basketball with her friends’ knowledge of football. “Let’s do it!” they agreed.

“We wanted to start the name with Palestine, because we needed to put Palestine on the map,” she explains.

“It is always Palestinian territories, the West Bank, occupied territories….or it does not even exist. So we said, put Palestine at the start so that everyone knows this organisation is located in Palestine and has to look up where Palestine actually is.”

In its founding year, Palestine Sports for Life launched a football school. It included children from a variety of backgrounds – with those from more affluent families paying a fee towards financing the facilities and the coaching staff and enabling other children to join free of charge.

Initially, Awartani recalls, the main goal of the football school was to provide young people with a place to play as many lacked access to sports facilities. “It was the first time the kids came to a stadium to play, it was a safe space for them but also a space where we could teach them life skills like how to communicate, perseverance etc.”

“It was about providing someone to coach them and give them a proper education.”

Eventually these coaches could take the training and experience they received through Palestine Sports for Life back to their own communities and spread the impact further. 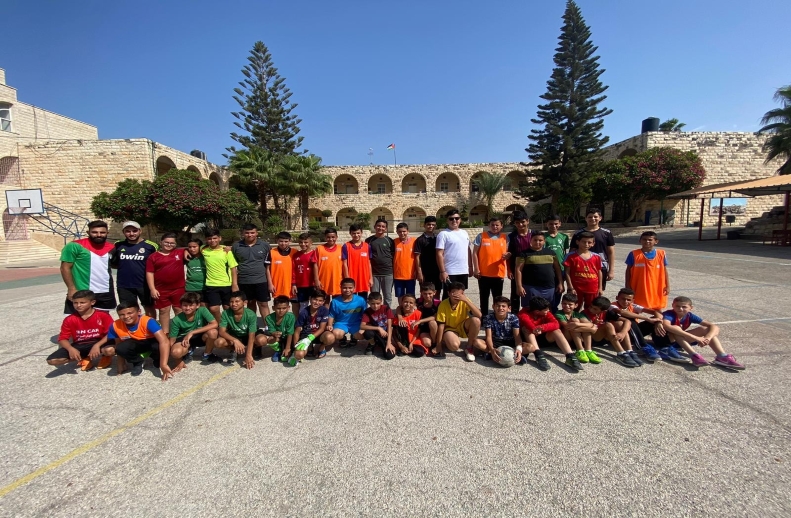 The stadium Palestine Sports for Life rented from the local municipality for sessions was also used by a professional men’s team for training and matches. One day, the group arrived at the stadium only to be stopped at the gate. “Oh sorry, we have a game, now,” they were told. Awartani was furious: “How about you tell us next time beforehand instead of me having 120 kids standing by the gate, as well as 120 parents and dealing with their frustration?” she told them.

“It was really difficult at the start to have a facility for stable trainings for these young people and having to confirm each training day by day with the municipality, the stadium, the one who opens the gate, the parents, the kids.

“This is where the Ministry of Education came in. They bought into the idea of how important sports after school are and were willing to contribute to having a space open for children to play. It was clear to them how important safe spaces to play were – the streets could be dangerous. And girls would also never play football out in the open.”

Through the influence of the Ministry of Education, Palestine Sports for Life was granted access to school grounds for sessions at the end of the school day.

In addition to securing funding or permissions for operating at particular sites, the culture of networking and connection also proved key at a local level.

“Each community has a different tradition, culture, different barriers, different restrictions. The challenge for us is always when we want to design any programme or when we want to implement any activity that it is done according to the context where we are working.”

Often, the ideas and programmes Palestine Sports for Life present in a community are first met with scepticism. To allay fears and win trust, Awartani and her team then explain that: “it is within the school system and this coach is from this family, from this area. You might know their parents. It is all about connection and networking.”

"For example, we run a football and life skills programme for 30 young girls and 60 young boys in Tulkarem, a conservative area led by a senior female football trainer together with two junior male trainers. Having a female senior trainer for young girls and boys, gives them the opportunity to play and learn from the game they love, and it changes stereotypes regarding female footballers who become role models for other girls in their community and beyond. Another programme is run in Sour Baher village for young girls by a female and male trainers from the same village. Without this programme, these girls wouldn’t have the opportunity to play football".

Beyond community engagement and securing locations for sessions, carrying out any activity in Palestine, Awartani explains, is highly challenging: “We always have several back-up plans. Violence, freedom of movement, checkpoints, as we live under occupation - you need to plan for that!”

At present, most of the sports programmes have been suspended as the region battles the consequences of the coronavirus pandemic.

“We went into four months of total lockdown,” Awartani reports, “All programming went online – we held sessions on a daily basis: on nutrition to strengthen the immune system, facts about covid-19 and sports sessions to keep participants fit.”

Some of the participants hit hardest by the pandemic are those living in the country’s many refugee camps. In a number of camps, Awartani says, there are coaches who have been trained through Palestine Sports for Life. By connecting with them, Palestine Sports for Life was able to also offer support to young people that were beyond the organisation’s reach: “Some kids are not able to access IT infrastructure. Sometimes there is no computer and just one phone per family. That is why these coaches are so important.”

“Through Common Goal’s Covid-19 Response Fund, we were able to support these young kids in the refugee camps and could send them health supplies. When there was able to be a bit more movement, we also went to Jordan valley. It has been under particular political pressure and also suffered due to covid-19. So, we had two coaches there carrying out different games to raise awareness on gender topics and covid-19.”

When the situation becomes more stable, Awartani looks forward to seeing more young people return to the pitch, increased exchange with likeminded individuals and organisations in pursuit of a shared mission: “We are not just building up specific individuals, but the community. We are building up the system – We are working towards changing the mindset towards sports, that sports is really important in our day-to-day life and not only talented people are playing sports. As an organisation we are the voice asking for change. With our running programmes we are advocating for change. Now there is an understanding that sports is more…it can be sports and life skills, sports and gender…and many other things.”