In his role as the German Football Federation’s U National Teams Head Coach Meikel Schönweitz is charged with helping to develop the country’s stars of tomorrow.

As part of that role the 40-year-old sees it as important to not only develop a player on the field but to encourage growth off it too.

By joining Common Goal Schönweitz wants to give back to the game that has absorbed his life from an extremely young age but he also wants his membership to stand for something more.

Through his pledge Schönweitz wants to stand as a role model for those he is helping to guide as well as showing that football is, at its core, a way to instil values in individuals and society.

We caught up with Schönweitz to find out more about his journey through the game and his motivations for joining the movement.

You started playing football at the age of three (at SV 07 Geinsheim). How did you get into the sport?

You could say that I was born on the football pitch (laughs). My father is a footballer, he played for a club, he was youth leader and chairman for years. My mother also played football. My father was actually my mother's coach. And my mother was my first coach. She's still coaching at the club today. I grew up on the football pitch, so if I had been able to, I would have started playing when I was two.

A football family, you could say. How was that?

It also had its negative aspects (smiles). That was also part of the life experience, let's say.

If you were to ask me now ‘Why Common Goal?’ that would be an aspect, that I was born on the football pitch and that football has shaped a large part of my personal development.

I was confronted with a lot of things very early on, starting with team sports, team spirit, up to how to interact with different types of people.

I started working as a coach relatively early - my father was also to blame for that (laughs) – because he had too many children on his team and asked me if I was could take some on. That is how it started and I learned to take on responsibility very young, learned how to lead groups. But also, as a player, I learned very early on how to deal with defeat, to make mistakes, to build up resilience in the face of criticism. It’s always difficult when your father is your coach. How do you deal with it? You are judged differently; people see you more critically. Back then, when I was young, it was sometimes painful, now I'm happy because it toughened me up in a certain way.

Football has given me so much. Now I would like to give just as much back.

Today, as Head Coach of the Junior National Teams at the DFB (German Football Federation), you are tasked with the development of a new type of player. What does the 'ideal' player look like?

There isn’t one. There are many different types of players. That's actually what we want. We don't want to raise soldiers who are all the same, who all have the same skills, we also want to have these differences. As part of my job, on the one hand, I'm looking for player profiles. On the other hand, and almost to a greater extent, I'm looking for the people who develop these players. There, I'm focusing more on coaching personalities, the suitable coaching qualifications in order to develop these players.

I believe we have such great potential in Germany and we have to exploit this potential by not only going in one direction with only the former professionals, only the football geeks, or whoever. You have to combine them. The same is true for players. It’s of no use to you if you have 11 Riberys on the pitch, but it is also not helpful to have 11 leaders on the field.

You want the diversity that exists in society on the pitch. You need to unite the two. That is the big challenge in football or in other team sports. So there isn’t a perfect player, there is only a perfect team.

What do you focus on in the development of a diverse new generation of players?

We try to focus a lot on personal responsibility, because I think that over the past few years in Germany we have seen the emergence of very, very many streamlined soldiers. They are shielded from anything unpleasant, players are viewed from all angles. [As a player] you can no longer afford to make a mistake, because everyone knows about it immediately. That makes you lose a bit of your own identity and then you also lose your creativity on the pitch. That then means you no longer have your own solutions, and if you face a challenge and the coach can’t help you, you don't know how to solve it.

So, that's what we're focusing on. In addition to all the technical training and ensuring the body can give what it needs to give, we try to promote personal responsibility and give the boys tasks where they have to find their own solutions. So, the coach just ends up being a companion on the way to a solution. That is our approach with the U National Teams because, ultimately, we want to have players who make their own decisions, who are creative, and who do surprising things. 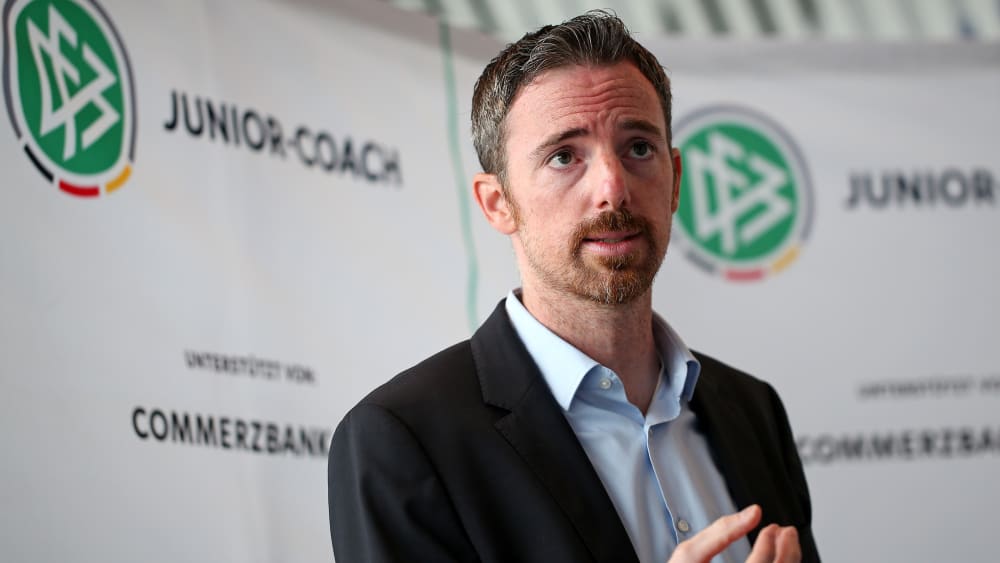 What gets in the way of players developing personal responsibility as well as the other characteristics you mentioned?

The whole system. You have to distinguish between the football system and the social system. The football system is, of course, extremely commercial. If you think about what is actually important in football, then the player should be the focus because, at the end of the day, they are the one who performs. The next point of reference is then the coach, because that is the person who has the closest relationship to the player.

If you know what they both need, then you can start thinking about what is important for the competition. If you know that, then you can think about what the calendar looks like and then, at the very end, what the system needs, what do the consultants, sponsors, media etc. need, but the reality is that this concept is flipped on its head. The focus is on the system: the media, the consultants, the associations, the clubs, the business. Everything else leads from this centre. Dates are adapted to it, and competitions adapt to it. The coaches then have to align themselves with the competitions.

At the very end of the line come the players. And that is a bit of a contradiction in terms at the moment. The player is not the focus, the coach is not the focus. The focus is not on the people [in football]. Right now, if you want to promote the development of the types of players I just described, then you have to try to reverse that system, which is a mammoth task, but it's worth every effort.

What value can football also represent in social terms and how does this influence how success is defined?

For me, success is the result of constant development and that never stops. That means you are never finished. Of course, you can win a championship, but your personal development never stops and when you have scaled the heights of Olympus, then the next success can be that you give back what you have gained through the sport. If you ask me about the overall situation, I believe there are three reasons for Common Goal and that is one of the three.

The first is the personal element: football has given you a lot and you want to give something back to football, which includes, by the way, you are now in a management position and, for me, leadership also means being a role model, and that is a way of showing how you act as a role model in reality.

The second element is to use football, or the power of football, as an opportunity, because we are not living in reality, in the bubble in which we find ourselves in. This bubble has nothing to do with reality. But I think football has enormous power – it is always criticised that there is too much money in this system, but the money that is in there has so many opportunities to be used positively, then it is good that there is so much money. If you reinvest what is there with this money, then that is a huge opportunity.

The third is to take football as an opportunity to convey values, to give something back to society as a whole and the third is also, this criticism of football annoys me, annoys me that football is always portrayed as if it were just people, who are after power, who are after more money. That's true for certain individuals, but I believe at the moment when so many people join this, from Kloppo and Julian (Nagelsmann) to people who, like myself, are not in the public eye, you can counteract this by showing people that there is maybe something else beyond these power-hungry and money-hungry people. There are people who see the overall system and that there is a life beyond the bubble. 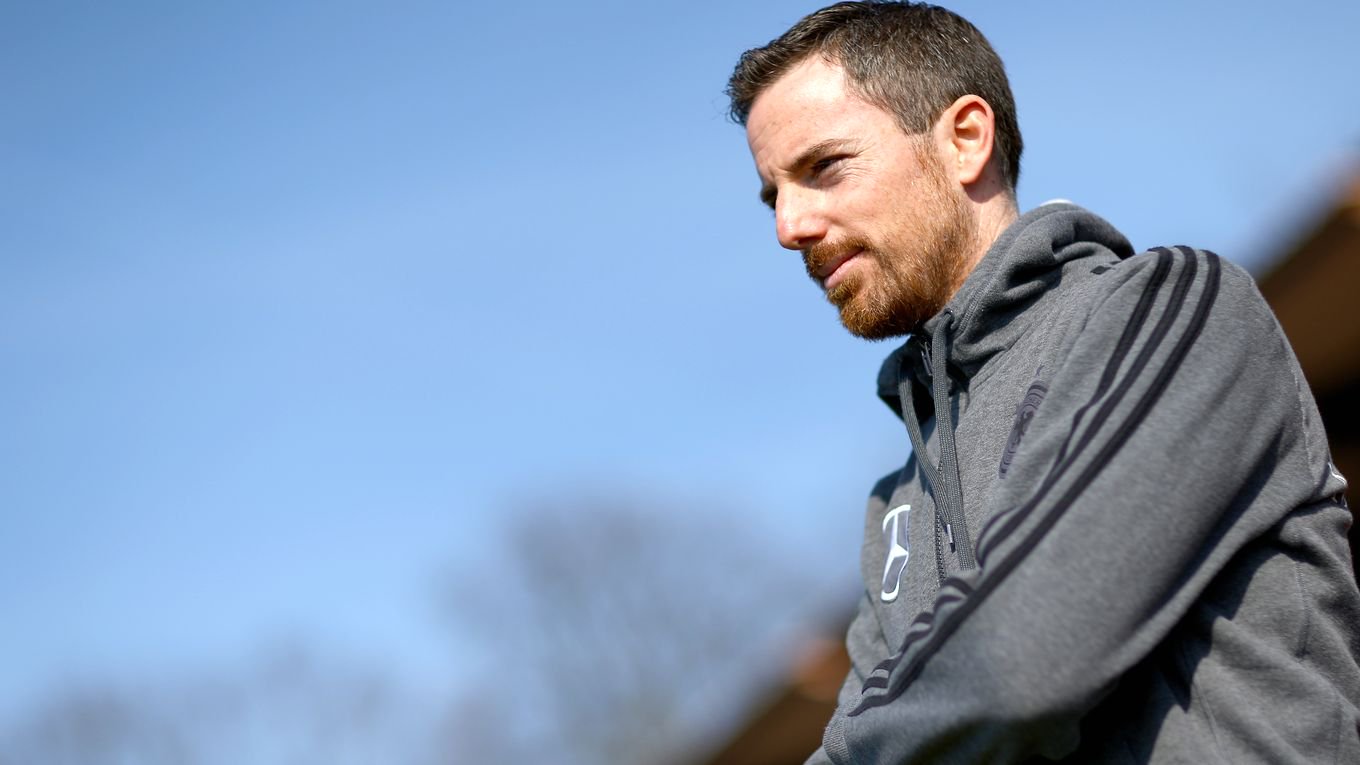 What values do you think football can offer?

I am convinced that football is a way of conveying values ​​that have become a bit lost in society. It's not just football, it's other sports, too. But football just has a huge reach and it is simply what draws the most people in Germany. In football, you can convey certain values ​​such as team spirit, courage, communication, well communication is not a value, but it is a skill that you can learn from team sports. Dealing with victory and defeat, tackling frustration, but also developing resilience. Football is also a great way to teach discipline, determination, and responsibility as well as tolerance and learning to respect others regardless of their background.

You can develop all that through football. Many of these qualities are being lost in society. That's why I think that football has a great opportunity to convey these, also based upon my own experience. The personality that I have stems from all of my personal experiences and, in my case, you can’t separate personal from professional, because almost all of my experiences have been through football. All these qualities, these values, I learned them through football. Sometimes it was tough, sometimes you hit a wall and you had days when you didn’t do so well. But that also shapes you if you in a positive way if you reflect on it properly. And that's where football is very powerful and those are the values ​​players can take away from football. Not just for football, but also for their overall personal development.